The message below was sent on Monday morning from Chris Paulsen, Freedom Indiana’s campaign manager.

At 12:53 am on Saturday morning, Indiana lawmakers officially adjourned for the 2017 session—and I’m proud to report: ZERO anti-LGBT bills advanced this year.

We entered this year under no false pretenses: Passing comprehensive statewide civil rights protections for LGBT Hoosiers would be a heavy and nearly impossible lift. But that didn’t stop us from meeting with lawmakers, sharing our stories and building support in communities across Indiana that discrimination has no place in our state.

And when a dangerous anti-LGBT bill did surface? Our movement sprung into action—instantly. HB 1361 would make it impossible for transgender Hoosiers to correct their birth certificates and other identity documents to match the gender they live every day.

But just one day after this horrible bill was introduced—after a flurry of media coverage while thousands of fair-minded Hoosiers spoke out to their lawmakers—the Republican chair of the committee said she would refuse to consider the bill whatsoever. 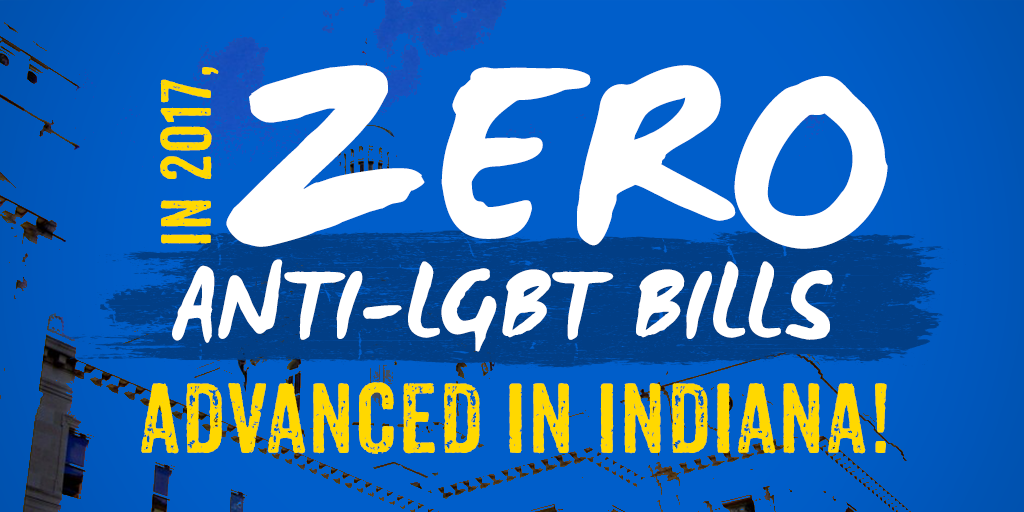 I want to be very clear: The fact that no discriminatory legislation moved in Indiana this year isn’t coincidence. It’s the direct result of the movement we’ve been building since we launched Freedom Indiana in 2013. We’ve proven to lawmakers that we are a force to be reckoned with—and we’ve ensured that there is absolutely no doubt: If harmful legislation advances, we’ll be there to stop it.

Yes, we are gravely disappointed that lawmakers failed to act on legislation protecting LGBT Hoosiers from discrimination and a long overdue bill establishing a hate crime bill in Indiana. And we want our lawmakers to know: These issues aren’t going away anytime soon. Between now and the 2018 legislative session, we’ll be here—making the case to lawmakers that there is no excuse to not act on these vital bills.

While legislative session comes to a close, we shift our focus back to passing local human rights ordinances. Last year, Indiana led the nation in passing local HRO’s—and with your help, we’ll keep growing that number.

Visit our Municipal Action Center to find out the latest and sign up to get involved in your community!

Thanks, as always, for your hard work and perseverance. Our state is stronger because of supporters like you.