I Wanted a Safe Workplace In Which I Could Transition Kathrynne • Indianapolis
When SCOTUS rules, we’ll rally June 2, 2015 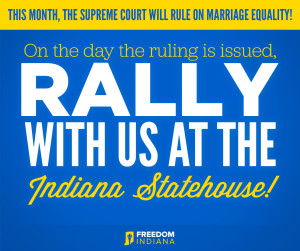 It’s hard to believe, Cameron: In just a matter of days or weeks, the U.S. Supreme Court will rule on the freedom to marry.

We don’t know when and we don’t know how the nation’s highest court will rule—but immediately after a ruling is issued, hundreds of Hoosiers will rally on the steps of the Statehouse. We need you there too.

Commit to joining us at our Decision Day rally at the Indiana Statehouse the day the Supreme Court rules on marriage equality. Sign up now, and you’ll be the first to know when the ruling comes down.

If there’s any state that’s been at the forefront of the movement to move marriage forward, it’s Indiana. From our successful campaign to defeat the anti-marriage constitutional amendment (HJR-3) to now, Hoosiers have been engaged in a heartfelt discussion of the importance of treating all families in our state with respect.

But let’s make one thing clear: Our progress does not and will not end at the Supreme Court.

Same-sex couples can legally marry in Indiana—and the very same day, be fired from their job or denied housing simply because of who they are. We have more work to do, and that includes updating Indiana’s civil rights law to prohibit discrimination on the basis of sexual orientation and gender identity/expression.

So no matter how SCOTUS rules, Hoosiers will stand together to show that our movement won’t stop until every LGBT person is treated equally under the laws of our state.

Rally with us on the steps of the Statehouse the day the Supreme Court rules on marriage. Click here to sign up and you’ll hear from us the second there’s a ruling with details about an event later that day.