I Wanted a Safe Workplace In Which I Could Transition Kathrynne • Indianapolis
We aren’t going anywhere. April 2, 2015 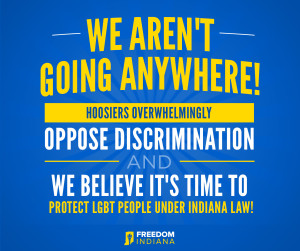 The harm has been lessened: Governor Pence has officially signed legislation significantly limiting the ways that RFRA could be used to discriminate against LGBT Hoosiers in employment, housing or public accommodations.

This is a big step forward, one that wouldn’t have been possible without you. But it doesn’t change reality: Under Indiana law, it is still legal to discriminate on the basis of sexual orientation or gender identity.

We won the battle today, but we haven’t yet won the war. Show that you’re committed to winning full protections for LGBT Hoosiers under Indiana law by adding your name here.

If the last week has proven anything, it’s that Hoosiers of all backgrounds believe discrimination is wrong—and we will stand together against divisive attempts to harm our friends and neighbors.

But with or without today’s RFRA change, discrimination is legal under Indiana law. Each and every day, far too many LGBT Hoosiers fear they will lose their jobs or be denied housing, simply because of who they are.

Whether it was our campaign to stop the anti-marriage amendment last year or our push over the last week to strike out a “license to discriminate” in RFRA—we’ve shown that our movement is a force to be reckoned with.

Now let’s commit to what’s next: Click here to add your name if you’re all in to commit to updating Indiana law to protect LGBT people from discrimination.

This is just the beginning. If you think we took a step forward today, just wait until the day we can celebrate making Indiana a state that clearly protects ALL of its citizens from discrimination.