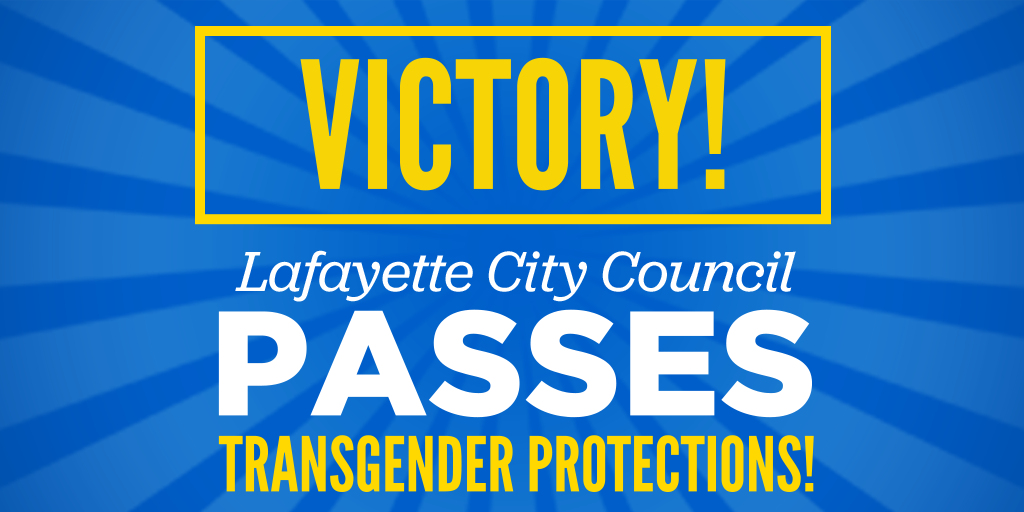 Before the final votes were cast, supporters of the ordinance packed the chamber to let council members hear first-hand about the positive effect passing these critical protections would have on Lafayette’s quality of life, including economically.

Council members were clearly listening: Even in the face of some vocal opposition, the vote was unanimous. Lafayette now becomes the 17th city in the state to provide full local non-discrimination protections for lesbian, gay, bisexual and transgender residents.

“While there are currently no statewide nondiscrimination protections for for LGBT Hoosiers, we at Freedom Indiana are pleased that so many municipalities are leading where the state legislature has failed so many times. With the passage of these local ordinances, communities like Lafayette, Indianapolis, Kokomo, Zionsville, Marion and Monroe counties — and hopefully Tippecanoe County — are proving they are open and welcoming to everyone, including gay and transgender individuals and their families.”

And on the heels of this momentous victory in Lafayette, another one is potentially brewing. Before the Lafayette City Council held its vote this evening, the Tippecanoe County Board of Commissioners voted unanimously this afternoon to give preliminary approval to an amendment that would apply transgender-inclusive non-discrimination protections across the whole county.

That amendment would still need to pass a final vote, but if it does Tippecanoe County would become the second Indiana county, after Marion County, to provide full non-discrimination protections in employment, housing and public accommodations to all residents.

These two votes show that the movement to pass comprehensive local LGBT non-discrimination protections is growing rapidly. However, replicating this victory in other cities and counties across the state will hinge on the support of local lawmakers.

That’s why Freedom Indiana would like to invite everyone to send a personal thank-you email to the Lafayette City Council members who voted in favor of the updated ordinance today. When lawmakers stand on the right side of history, it’s important that we thank them and let other lawmakers know we’ll have their backs in the future.

Click here to show your support by sending a personal thank-you message to lawmakers.