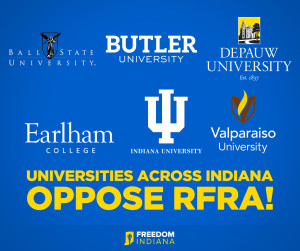 Indiana University, DePauw University, Butler University, Ball State University, Earlham College and Valparaiso University have all made public statements against the Religious Freedom Restoration Act (RFRA) signed into law by Governor Pence on March 26 because it gives individuals and private businesses a “license to discriminate” against gay and transgender Hoosiers under the guise of religious beliefs.

In a statement, Indiana University President Michael A. McRobbie said:

While Indiana University hopes that the controversy of the past few days will move the state government to reconsider this unnecessary legislation, the damage already done to Indiana’s reputation is such that all public officials and public institutions in our state need to reaffirm our absolute commitment to the Hoosier values of fair treatment and non-discrimination.

To that end, Indiana University will recruit, hire, promote, educate and provide services to persons without regard to their age, race, disability, ethnicity, gender, gender identity, marital status, national origin, religion, sexual orientation or veteran status. Equally importantly, we will not tolerate discrimination on the basis of any of these same factors.

Butler University President James Danko emphasized the statewide backlash resulting from the bill, as he stated, “While I have read a variety of opinions and rationale for RFRA, it strikes me as ill-conceived legislation at best, and I fear that some of those who advanced it have allowed their personal or political agendas to supersede the best interests of the State of Indiana and its people. No matter your opinion of the law, it is hard to argue with the fact it has done significant damage to our state.”

DePauw University President Brian W. Casey echoed Danko’s statement, saying that while he wanted to avoid such divisive discussion on the school’s campus, “legislation that has the effect of either encouraging or condoning discrimination, however, must be addressed.”

Ball State University President Paul Ferguson assured members of the community that Ball State does not partake in discrimination of any kind despite Governor Pence passing the bill.  “In the context of the current state and national conversation related to Indiana’s recent legislation, it is important to reaffirm that Ball State University has long been committed to a vibrant and diverse community and will not tolerate discrimination. The university expresses this in many ways, including our Equal Opportunity and Affirmative Action Policy, which clarifies that Ball State will provide equal opportunity to facilities without regard to race, religion, color, sex, sexual orientation, gender identity/gender expression, physical or mental disability, national origin, ancestry, or age.”

Earlham College President David Dawson announced the university’s commitment to diversity and inclusion, saying that: “As a learning community that aims to create social justice, we aspire to treat all humans with respect, honoring human dignity. We also acknowledge that Earlham College exists within a history of systemic cultural and economic oppression that has denied certain groups equal access to education and power. To help redress such injustice and to make our college community more representative of our society and world, we seek to promote the presence and voice of groups that have been historically oppressed because of such factors as race, ethnicity, sex, gender, sexual orientation, socioeconomic class, and physical ability.”

Valparaiso University President Mark Heckler released a formal statement that the university stands with other organizations against discrimination, and that: “Valparaiso University’s Board-approved non-discrimination statement welcomes all people regardless of race, ethnicity, age, gender, sexual orientation, or religion. As an independent Lutheran University, we will continue to welcome people of all faiths, cultures, and walks of life to join us in this community of dialogue across difference under our distinctive Lutheran model of education. And we will continue this commitment even when our elected leaders make decisions, like the RFRA, that operate in contradiction to our values. We will seek to model for our state and nation what it can be like to live in a community of love and mutual respect.”

Organizations and companies have issued statements in opposition to RFRA including the NCAA, the NBA and Apple, while major employers in the state like Angie’s List, Yelp and Salesforce have announced that they may pull millions of dollars in investments and thousands of jobs over concerns that this bill will lead to discrimination against their employees.

Governor Pence has announced that he is planning to work to “clarify” the RFRA with lawmakers, but he has not yet introduced legislation.

That’s why today, we introduced the Fairness for All Hoosiers Act—much-needed legislation that would fix RFRA and ensure LGBT Hoosiers are protected from discrimination under Indiana law. Click here to urge your lawmakers to support this bill!