Tippecanoe County residents are celebrating today another local victory in the movement for LGBT equality.

This morning Tippecanoe County’s three-member Board of Commissioners voted unanimously to add transgender-inclusive non-discrimination protections to its existing human rights ordinance. The updated ordinance empowers the county’s human relations commission to investigate and resolve complaints of gender identity discrimination as it currently does discrimination based on race, gender, religion or sexual orientation. 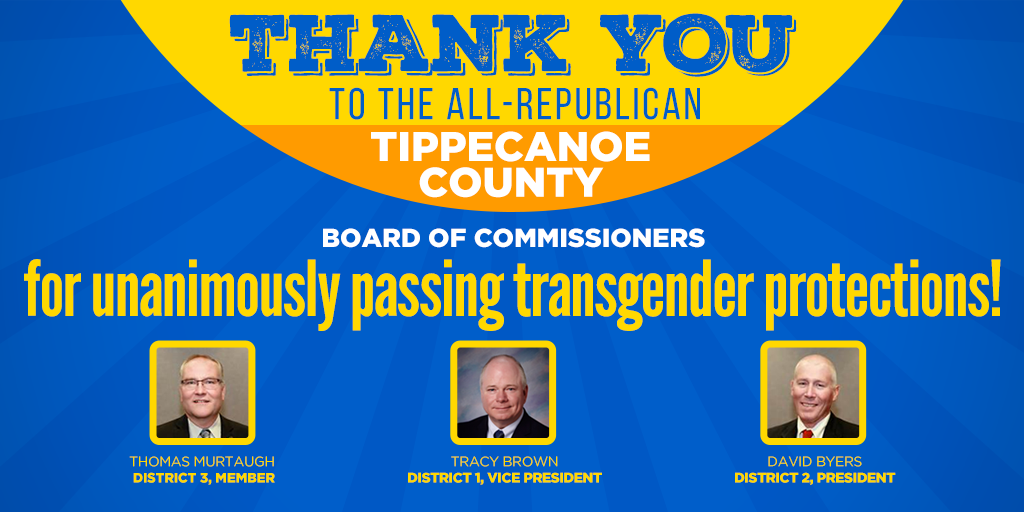 This is the second unanimous victory for transgender non-discrimination protections in two weeks. On Sept. 6 eight members of the Lafayette City Council—including its only Republican member—voted to add transgender-inclusive protections to the city’s human rights ordinance. This morning, the three commissioners—all of whom are Republican—voted to do the same for the county.

Ultimately, these recent votes are proof that support for LGBT non-discrimination protections is not a partisan issue. It’s just the right thing to do. And when lawmakers put aside partisan politics to do what’s right, it’s important that we say thanks and let them know that their constituents stand with them.

That’s why Freedom Indiana would like to invite you to say ‘thanks’ to the three Tippecanoe County Commissioners who voted to protect transgender people from discrimination.