Freedom Indiana believes Hoosiers sharing their stories about what it’s like to be an LGBT person in a state that doesn’t offer comprehensive non-discrimination protections is key to changing hearts and changing laws. That’s why we share these stories every chance we get.

This week, three Hoosiers from across the state are sharing what motivates them to keep pushing for comprehensive LGBT non-discrimination protections. For many LGBT Hoosiers, it’s the experience of discrimination firsthand, or the thought that it could happen at any time.

Lane Banister is the Education Program Coordinator at the Indiana Youth Group, the largest organization in the state dedicated to supporting LGBT young people. He’s also coordinator of the Indiana Gender and Sexuality Alliance, which provides support to LGBT youth in schools. Lane is a very public advocate for transgender people in Indiana. His most recent project was helping to organize and host Trans History Night at the Indiana Historical Society, which featured celebrity activist Andrea James.

“I’m working to build a future where this won’t happen to any of the kids that I care about.”

In his work with IYG Lane encounters a lot of young people who have experienced heart-breaking discrimination, frequently from their own family members. He knows exactly how they feel. Lane once faced the humiliation of being escorted out of a public bathroom in a crowded movie theater—something he couldn’t have happened if Indiana had comprehensive non-discrimination protections.

Dana Black is a lifelong resident of Indianapolis. While Dana is motivated to fight for equality because of her lived experiences—she’s a lesbian who’s been out for 26 years—at her core she’s motivated by the belief that every individual has the right to live up to their full potential, even if that potential doesn’t fit into predetermined societal norms. 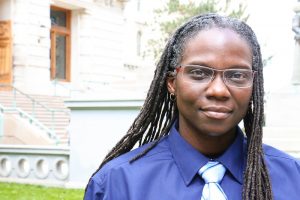 “We will always find differences in each other. But those differences should not be a reason for one group to experience discrimination by another in the workplace, in education or in housing.”

She knows though, some people will still be discriminated against because of their differences—which is why Indiana needs to step up and be a voice for the voiceless and fight for those who can’t fight for themselves. That means passing comprehensive non-discrimination protections.

Cale Ulery is the front of house manager at Bloomington’s Upland Brewing Company. Upland is a member of Indiana Competes, a coalition of businesses that support passing statewide protections for LGBT Hoosiers. That makes Cale feel pretty safe where he works, and Bloomington itself is known to be very welcoming to the LGBT community. The city is one of 16 in the state that has a local human rights ordinance that protects people from discrimination based on sexual orientation and gender identity.

That being said, Cale knows workers across the state don’t have this kind of security. That’s what motivates him. 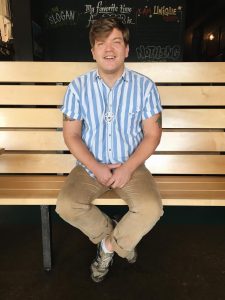 “Feeling safe in my place in the world starts with feeling safe in my community and most importantly my workplace. It is very important to me to work for and champion companies that will support and fight for the equality and rights of all. Everyone deserves to feel safe in this world.”

Freedom Indiana would like to thank Lane, Dana and Cale for sharing their stories. If you have a story you’d like to share, we’d love to hear it. Just click here to let us know. And if, like Lane, Dana and Cale, you support updating Indiana’s non-discrimination laws to protect our LGBT friends and neighbors, you can email your lawmakers and tell them to make it happen.