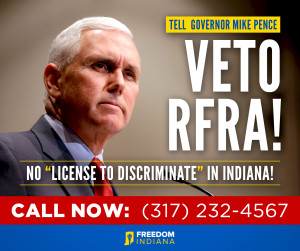 It’s a dark day in Indiana.

Moments ago, the so-called Religious Freedom Restoration Act (RFRA) passed in the House. Now it’s all eyes on Governor Mike Pence as this horrific bill—which grants individuals and businesses a “license to discriminate” against LGBT Hoosiers—moves to his desk.

Dial (317) 232-4567 now and tell Governor Pence to use his veto power to block this dangerous bill from becoming law. Then click here to let us know you called.

Shameful. That’s the only way to characterize the strong arming of this legislation over the last several weeks as proponents of RFRA have done nothing but disregard the voices and concerns of real Hoosiers who know this “license to discriminate” bill means real consequences for our state.

Just hours before today’s vote on the House floor, we delivered petition signatures from nearly 10,000 Hoosiers calling on lawmakers to drop RFRA. And last week, we pointed out the real dangers of this bill—including impacts on local human rights ordinances and the erosion of enacted regulations to protect young Hoosiers in child care ministries.

But supporters of RFRA didn’t listen. And now, this misguided bill is just steps away from becoming law—and sending a clear message that the Hoosier State is only open for business for some, not all.

Tell Governor Pence: Veto RFRA and block this bill before it harms tens of thousands of Hoosiers who call Indiana home. Dial (317) 232-4567 now and then click here to let us know you called.

This isn’t the news we were hoping for—but I know you won’t stop pushing until the last possible second.