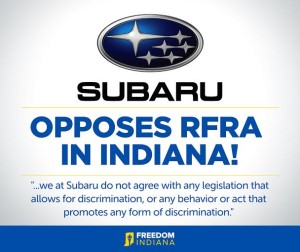 Moments ago, Subaru of America, Inc. became the latest Fortune 500 company to speak out forcefully against the so-called Religious Freedom Restoration Act.

In a statement, the company said:

“While we recognize that the voters in each State elect their own legislature to decide that State’s laws, we at Subaru do not agree with any legislation that allows for discrimination, or any behavior or act that promotes any form of discrimination. Furthermore, we do not allow discrimination in our own operations, including our operations in the state of Indiana. We will certainly continue to take the issue of non-discrimination into consideration as part of our decision-making processes.”

Subaru, which has a plant in Lafayette, IN and employs nearly 3,500 people in the Hoosier State, joins other major employers of Indiana to speak out against RFRA including Alcoa, Cummins, Eli Lilly & Co., and Salesforce.

They, like Subaru, note that by passing a “license to discriminate” bill into law, their customers and their employees are put in harms way by this ill-conceived and dangerous law.