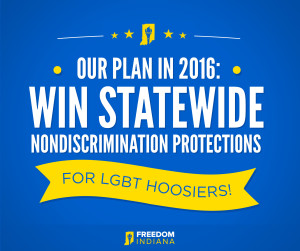 Freedom Indiana, the statewide grassroots organization that successfully fought a constitutional marriage amendment and sounded the alarm on the economically devastating Indiana Religious Freedom Restoration Act (RFRA), today launched a campaign to update existing laws against discrimination to include gay and transgender Hoosiers.

The campaign will be managed by Chris Paulsen, a veteran grassroots advocate who formerly served as president of Indiana Equality Action.

“The fallout from RFRA harmed our state’s reputation, but it also drew attention to the fact that you can be fired, denied housing or declined service in most places in Indiana if you are gay or transgender,” Paulsen said.

“A lot of people didn’t realize that before RFRA, and we know now that a majority of Hoosiers want to see our laws updated to protect gay and transgender people,” she said.

Freedom Indiana will move into Downtown office space this week and begin hiring for positions to assist with statewide outreach and education.

Over the summer, a number of cities enacted local protections for gay and transgender people, but Paulsen said the only way to make it clear that Indiana is open to everyone is to update our state civil rights law so people don’t have to worry whether they’re protected from one county to the next.

“It’s an easy solution: four words and a comma,” she said, referring to the addition of “‘sexual orientation, gender identity'” to the section of state code that already contains protections based on race, gender, veteran status and religion.

“No one is asking for special rights. We’re just asking lawmakers to ensure fair treatment of groups of citizens who have historically been treated unequally, and we hope they’ll act quickly in the upcoming session,” Paulsen said.

Lawmakers will convene in Indianapolis for Organization Day in mid-November. The legislative session will begin in January 2016.