I Wanted a Safe Workplace In Which I Could Transition Kathrynne • Indianapolis
Indy Star: Let’s enact a state law that fully prohibits discrimination April 3, 2015 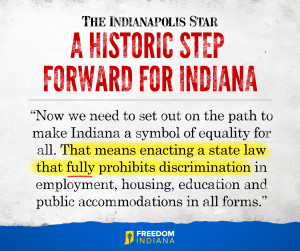 The Indy Star published an editorial responding to the signing of legislation clarifying that Indiana’s Religious Freedom Restoration Act (RFRA) cannot be used to discriminate against gay and transgender Hoosiers in employment, housing and public accommodations.

The editorial outlines the provisions of the addition, which “restored the protections in place in Indianapolis and other communities with local human rights ordinances that cover LGBT rights. The fact that business leaders and others rallied around the cause signaled a first, but significant, step toward the possibility of statewide protections being adopted for all gay and lesbian Hoosiers.”

Although the revisions are not perfect, the Indy Star believes the compromise between lawmakers is “realistic and necessary.”

The Indy Star continued by noting just how quickly the legislation changed in favor of non-discrimination. “It was only a week ago that Pence and the General Assembly sent a devastating message to the state and to the world. Their decision to enact RFRA set off a firestorm, fueled by concerns here and across the nation that the new law would allow businesses and individuals to discriminate against LGBT Hoosiers.”

In fact, the Indy Star itself published a full-page front-page editorial earlier this week demanding an immediate fix to the RFRA bill, an unprecedented action for the paper. The editorial stated, “Our image. Our reputation as a state that embraces people of diverse backgrounds and makes them feel welcome. And our efforts over many years to retool our economy, to attract talented workers and thriving businesses, and to improve the quality of life for millions of Hoosiers.

“All of this is at risk because of a new law, the Religious Freedom Restoration Act, that no matter its original intent already has done enormous harm to our state and potentially our economic future.”

After Indiana was placed under the limelight on a national scale, with companies and organizations speaking out against the legislation and threatening the potential loss of millions of dollars in revenue, a group of Indiana’s top business and civil rights leaders “rallied to push for and help craft the deal. Their leadership helped Indianapolis and the state to begin recovering from disaster.”

Now that the national conversation on discrimination has shifted and Indiana’s RFRA has been revised, the Indy Star urges the state legislature to “set out on the path to make Indiana a symbol of equality for all. That means enacting a state law that fully prohibits discrimination in employment, housing, education and public accommodations in all forms.

“Let’s send a resounding message, unmistakable in clarity: Indiana welcomes everyone. Indiana values everyone equally. Indiana will not tolerate discrimination against anyone.”

Although this historic victory in Indiana marks a new chapter in non-discrimination legislation, our work is not done until LGBT Hoosiers have full protections under Indiana law.