Moments ago, the St. Joseph County Council passed a Human Rights Ordinance which aimed was to protect LGBT Hoosiers from discrimination, but that actually codifies discrimination into county law. 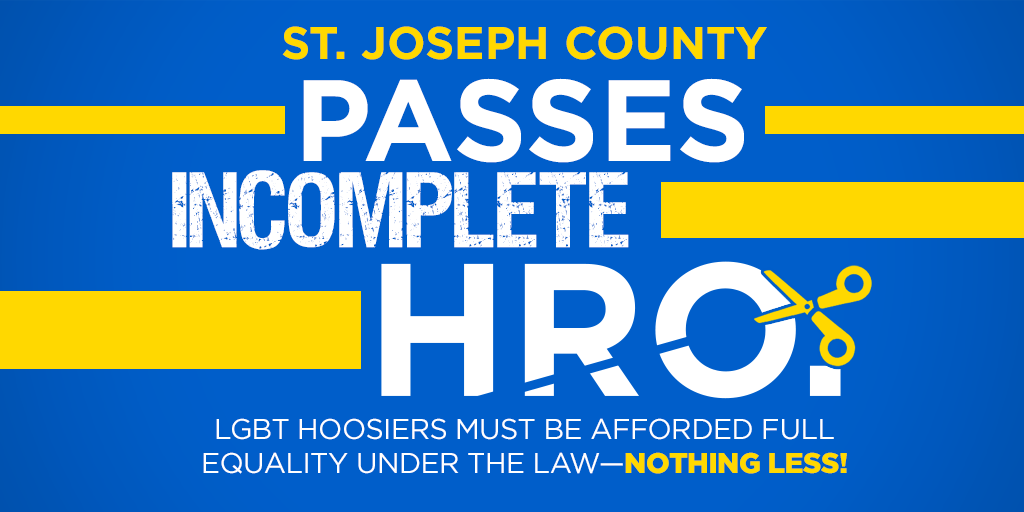 As passed, the ordinance lacks an enforcement mechanism and actually treats LGBT discrimination differently under the law than other forms of discrimination—like discrimination based on a person’s race or gender.

According to Chris Paulsen, campaign manager for Freedom Indiana, the ordinance was likely well-intentioned, but falls far short of offering the protections LGBT people truly need—and it could even be harmful.

The ordinance is problematic in two key ways:

First, it places the enforcement power with the state Civil Rights Commission. But under state law, the Commission does not have the jurisdiction to enforce sexual orientation and gender identity protections. So an LGBT person could face discrimination in St. Joseph County—like being be fired—and file a complaint, but no organization would be empowered to investigate or levy penalties based on that complaint.

Local lawmakers should be applauded for tackling the important issue of discrimination. But ordinances that are not comprehensive and that do not offer any oversight can actually have grave consequences in the lives of LGBT people.

Visit our Municipal Action Center to find out more about Freedom Indiana’s work to support local organizing across the state—and please let us know if you’re interested in moving an ordinance forward in your community.