I Wanted a Safe Workplace In Which I Could Transition Kathrynne • Indianapolis
Senate Rules Committee Advances Flawed SB344 Without Transgender Protections January 28, 2016

Today, after hours of discussion, the Senate Rules Committee advanced SB344, a deeply flawed bill that includes no protections for transgender people in Indiana.

The bill, which was already bad, was made even worse by a series of amendments designed to make it even easier for adoption agencies, homeless shelters and nonprofit organizations to legally discriminate against LGBT Hoosiers. Prior to any public comment, SB344 was also amended to repeal RFRA and replace it with substandard protections that omit transgender people entirely and provide religious carveouts that undermine the very purpose of the civil rights law. 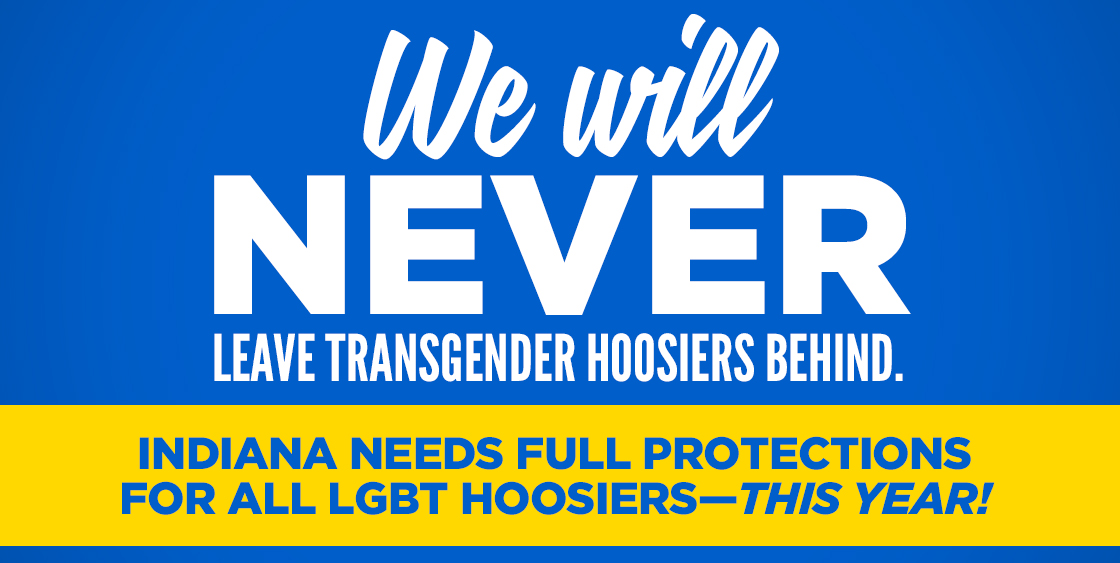 Our position has always been 100% clear: The rights of transgender Hoosiers are not negotiable. We will never stand for any legislation that excludes gender identity protections—and as SB344 advances to the Senate floor, we will continue pushing harder than ever for passage of full, comprehensive LGBT civil rights protections this year.

“Lawmakers still aren’t listening. Tonight, they took a bad bill and made it worse for LGBT people in our state who have to live each day in fear that they could be fired, denied housing or turned away from a public place for who they are.

“Senate Bill 344 continues to fall far short of ending legal discrimination against LGBT people in our state. As amended, it repeals the Indiana Religious Freedom Restoration Act but replaces it with substandard protections that omit transgender people entirely and provide religious carveouts that undermine the very purpose of the civil rights law. We will continue to work with lawmakers to fix this bill, but we are disappointed that they have not made the substantive changes we know a majority of Hoosiers want to make our state open and welcoming to all people.”

While our lawmakers should be ashamed today, our movement should be proud. Today, hundreds of Hoosiers lined the halls of the Statehouse, camped out for the day to show lawmakers that we are committed to winning comprehensive protections this year.

At the hearing, a diverse array of Hoosiers stood together—Democrats, Republicans, business leaders, people of faith and LGBT people—under the core belief that our state is stronger when all people are protected from discrimination. We’re incredibly grateful to the brave supporters who stood before the committee today to share their stories. And while lawmakers failed to do the right thing, we know that tonight, we showed the world that the people of Indiana are not represented by the laws of our state.

We won’t stop fighting for full protections for LGBT Hoosiers, with no exceptions. Click here to call on lawmakers to stop the attacks and short-sighted bills—and pass legislation affording meaningful protections to LGBT Hoosiers.