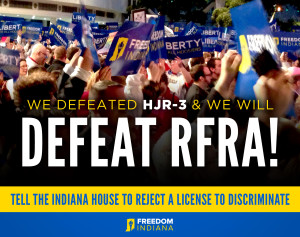 Moments ago, the Indiana Senate passed the Religious Freedom Restoration Act (RFRA). Now, this harmful bill which would give individuals and businesses a license to discriminate against LGBT Hoosiers moves to the House, where we can—and we must—defeat it.

Tell your Representative: Discrimination isn’t a Hoosier value. Click here to send an email in opposition to RFRA now—and let’s show members of the House that we won’t back down.

I won’t sugarcoat it: We have a tough fight against us. Proponents of this mean-spirited legislation are working around the clock to harm hardworking Hoosier families—and if they succeed, Indiana’s reputation and economic growth would be put at serious risk.

But if there was ever a campaign that overcame incredible odds to defend freedom, it’s this one. Together, we stopped the anti-marriage amendment last year—and together, we’ll strengthen and mobilize the grassroots army we need to stop RFRA in the House.

Members of the House will begin considering this misguided legislation in the coming weeks. Let’s show them—right now—that Hoosiers won’t stand by as our lawmakers consider legislation allowing for discrimination against our neighbors and friends.

Help defeat RFRA. Click here to email your Representative, urging them to reject a “license to discriminate” against LGBT Hoosiers.

Let’s make history—again. Thanks for being a part of this campaign.