Moments ago, legislative leaders introduced SB 344 as an alternative to the already-introduced SB 100—with the supposed aim to protect LGBT Hoosiers under Indiana’s civil rights law. But just like SB 100, this latest bill presents more problems than solutions. 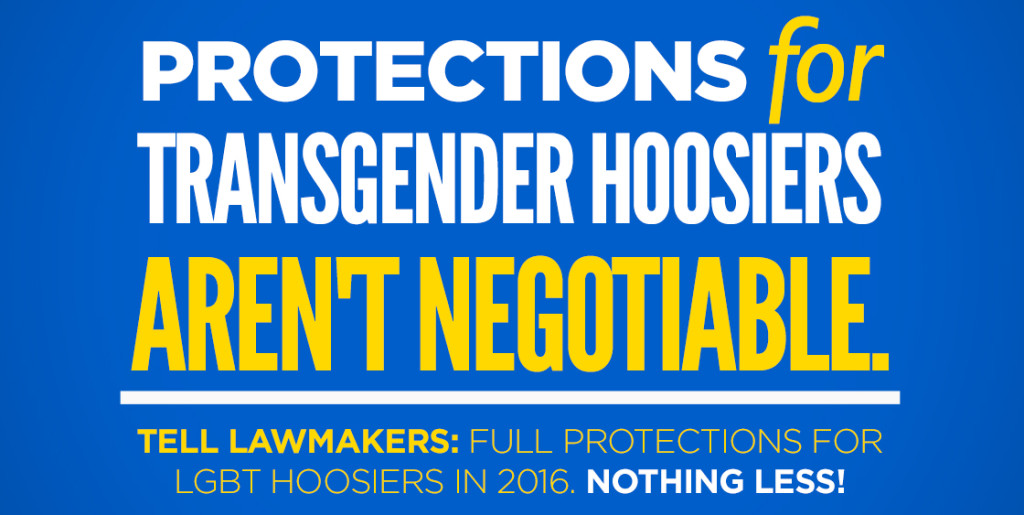 Most notably: SB 344 offers zero protections for transgender people in Indiana. None whatsoever. This legislation isn’t just incomplete—it’s a non-starter. Lawmakers need to know that Hoosiers won’t stand for it.

Both SB 344 and SB 100 represent a complicated attempt to cure a problem that requires a simple solution.

Gay and transgender people should not be subject to legal discrimination. Indiana’s civil rights law should be updated to reflect that commitment and make it clear that we are an open, welcoming place to live, work and play.

The more lawmakers try to dance around the need for real, clear protections, the more it looks like they want a way to maintain the status quo where LGBT Hoosiers have no protections under state law.

Fight back against this misguided attempt to deny protections to transgender Hoosiers. Tell lawmakers that the simplest solution is to afford comprehensive civil rights protections to LGBT Hoosiers.

We’ve said it from the beginning. This isn’t hard: just four words and a comma to add “sexual orientation, gender identity” to Indiana’s civil rights law.

Let’s make sure members of the General Assembly are listening.