Everyone Stands to Benefit Michelle & Stephanie
Salesforce urges the Indiana House to say “no” to RFRA March 19, 2015 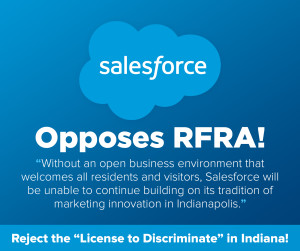 Salesforce.com has joined a growing chorus of businesses large and small speaking out against the proposed so-called Religious Freedom Restoration Act, which could give individuals and businesses the ability to discriminate based on religion.

CEO Scott McCorkle wrote a letter to the Indiana General Assembly in firm opposition to SB101, saying, “We have been an active member of the Indiana business community and a key job creator for more than a decade. Our success is fundamentally based on our ability to attract and retain the best and most diverse pool of highly skilled employees, regardless of gender, religious affiliation, ethnicity or sexual orientation.”

McCorkle further described how the legislation would jeopardize the future of the Indiana business market, and that the impacts are still uncertain. “This lack of clarity hurts the business community and the connections that a successful region and state need to continue progress in a competitive environment. Without an open business environment that welcomes all residents and visitors, Salesforce will be unable to continue building on its tradition of marketing innovation in Indianapolis.”

The freedom of religion is one of the most fundamental rights in the American Constitution. However, passing RFRA could make laws against discrimination less clear and less uniform. Gay and transgender people deserve to work and live freely in Indiana, and this broadly worded, misguided legislation could damage Indiana’s brand and harm the ability for businesses in our state to attract and retain top talent.

Today House Judiciary Committee voted 9-4 to send the RFRA bill to the House, where it still awaits final consideration.