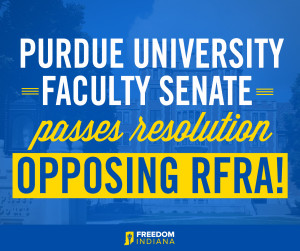 Passing with a landslide vote of 52 to 4, the resolution reads: “We believe State Enrolled Act 101, the Religious Freedom Restoration Act, will harm our ability to recruit and retain students, staff and faculty. The University believes that diversity among its many members strengthens the institution, stimulates creativity, promotes the exchange of ideas, and enriches campus life.”

The vote took place three weeks after the March 26th signing of RFRA into law. RFRA originally allowed businesses and individuals to discriminate against gay and transgender Hoosiers under the guise of religion. However, after public backlash from major companies and organizations as well as national media attention, the legislature decided to amend the bill to not undermine non-discrimination ordinances in place in certain cities and municipalities in the state.

Although the legislature’s fix to the RFRA is a step in the right direction, we still need to take action and free our state of discrimination once and for all. Urge your legislators now to pass a statewide non-discrimination bill!