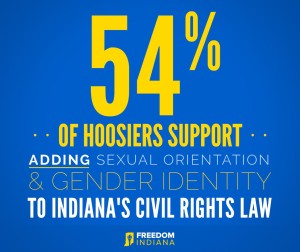 Despite the major backlash facing Indiana in the wake of Governor Pence signing the discriminatory Religious Freedom Restoration Act into law, there is undeniable momentum as we move forward with our coalition partners to push for a statewide law protecting gay and transgender people from discrimination.

This is evident in a new Howey poll which found that 54% of Hoosiers support adding gender identity and sexual orientation to Indiana’s civil rights law.

On the RFRA issue, 59% said the law was unneeded, compared to 30% who said it was necessary. Another 50% believe the controversy surrounding the law will have a ‘negative impact on the economy’ after it ‘isn’t front page news.’

And on this question: Indiana’s civil rights law makes it illegal to discriminate on the basis of gender, race, religion or disability. Do you support or oppose adding sexual orientation and gender identity to the law? The response was 54% agreed, 34% opposed and 12% didn’t know.”

This finding is critical, because despite updates to RFRA clarifying that the law not undermine existing local civil rights protections for gay and transgender people, the fact remains that Indiana law has no such protections and a majority of Hoosiers do not live in municipalities that have a law that protects against discrimination on the basis of sexual orientation or gender identity.

The most obvious fix to this dilemma is to pass statewide protections ensuring all Hoosiers are protected from discrimination—including gay and transgender people. And with the results of this poll, it’s evident that now a majority of Hoosiers agree that this is the right path forward for our state.