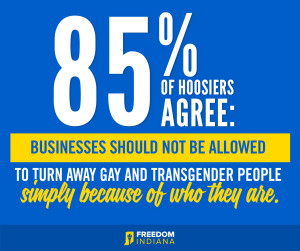 A recent poll reveals that the vast majority of Hoosiers strongly oppose allowing individuals or businesses to refuse service on the basis of sexual orientation or gender identity.

The poll released on Monday by Greenberg Quinlan Rosner Research reveals that 85 percent of people in Indiana believe business owners should not be allowed to turn away a customer based on sexual orientation or gender identity, despite the business owner’s religion. Only 12 percent said that businesses should be allowed to turn away customers, while 3 percent did not answer.

Governor Pence signed into law the state’s Religious Freedom Restoration Act (RFRA) on March 26th, which in its initial form explicitly allowed businesses and individuals to discriminate against gay and transgender Hoosiers under the guise of religion.

A polling memo issued by Greenberg Quinlan Rosner Research said, “Pence and his supporters in the legislature may have imagined this issue energizing their base without any real collateral impact outside of a minority of LGBT activists. They could not have been more wrong.”

Once well-established, profitable companies and organizations in the state spoke out against the legislation, the state legislature reconsidered the bill, and passed additional legislation clarifying that it could not be used to undermine existing non-discrimination laws in local municipalities across the state.

The same poll from January said that 57 percent of voters believed the state was headed in a positive direction, and that “moral values” was a low-priority issue.

JoDee Winterhof, HRC’s vice president of policy and public affairs, said, “Elected officials, and governors specifically, who experiment with these anti-LGBT bills that allow businesses to discriminate against LGBT people do so at their own peril.”

The fate of Indiana has set a precedent across the country, making a clear case to lawmakers that discrimination is bad business and bad politics.

We still need your help if we want to pass a fully comprehensive non-discrimination bill in Indiana: tell your lawmakers now that revising RFRA is not enough!