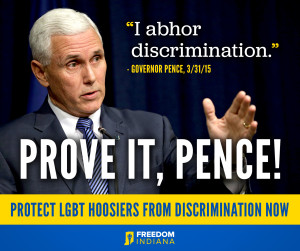 Just a few minutes ago, the Governor wrapped up a press conference where he attempted to offer a “solution” addressing the grave concerns that RFRA is a “license to discriminate” against LGBT Hoosiers.

Not surprisingly, Governor Pence came up empty. He presented no solutions for RFRA, no bill language—he said ABSOLUTELY NOTHING new. Yet again, with millions of dollars and thousands of jobs on the line, the Governor failed to offer a plan for rebuilding Indiana’s damaged reputation.

Governor Pence doesn’t have a solution, but we sure do. Yesterday, we introduced the Fairness for All Hoosiers Act—to prohibit discrimination against LGBT Hoosiers under state law and protect existing civil rights protections.

Together, we can pass this much-needed bill this year. Click here chip in $10 to fuel our statewide, grassroots campaign to pass the Fairness for All Hoosiers Act this year.

You’d think after five days of what the Indy Star called “the greatest crisis of his political career,” Governor Pence would have an answer—or at least get his talking points straight.

He said over and over again that he “abhors discrimination”—but still refused to admit the truth known around the nation: the Indiana RFRA is about nothing more than legalized, state-sanctioned discrimination.

Indiana is suffering, and we can’t afford to wait. We need answers, we need solutions—and we need to make Indiana open for business again to everyone.

If you’re ready to move Indiana forward by passing the Fairness for All Hoosiers Act this year, click here to chip in $10 or more—and let’s show Gov. Pence we aren’t waiting.

Just a few days ago, no one thought we’d be in a position to clarify RFRA, or to pass statewide non-discrimination protections for LGBT Hoosiers—just like nobody thought we’d be able to stop HJR-3 last year.

Now, if we can all invest in this campaign, we can defy the odds again, by securing critical non-discrimination protections for LGBT people.