I Wanted a Safe Workplace In Which I Could Transition Kathrynne • Indianapolis
New Albany City Council votes for resolution calling for repeal of RFRA April 8, 2015 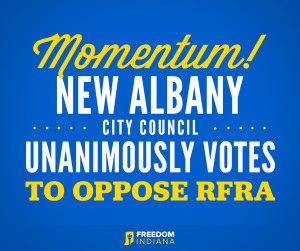 The resolution was approved by a landslide vote of 8-0 on April 6.

In 2012, the City Council approved a Human Rights Commission forbidding the discrimination of gay and transgender people in employment, housing and commerce. Governor Pence’s RFRA would have rendered this resolution meaningless. However, after severe backlash from prominent businesses and organizations in the state, the legislature amended the bill to not undermine cities’ current non-discrimination ordinances. With the RFRA “fix,” the non-discrimination ordinance in New Albany cannot be disregarded in the name of religion, but members of the New Albany City Council took one step further by passing this resolution in opposition to RFRA.

Councilman Bob Caesar said, “I just think it will lead to more and more discrimination in time.”

Councilman Greg Phipps, the councilman who sponsored the 2012 ordinance, said that there have been three cases of discrimination since the ordinance was passed. Two dealt with gender identity and has been resolved, and the other dealt with a contractor who refused work to a gay couple. Phipps said that it’s critical to create a community where people know their rights will be protected. “We will not tolerate any form of discrimination in the city of New Albany.”