A new poll shows that Hoosiers are more ready than ever to enact LGBT nondiscrimination protections statewide.

The poll, which was conducted by the Princeton Survey Research Associates International (PRSAI) on behalf of Ball State University, shows that that nearly three-fifths of respondents—58.5%—would support amending Indiana’s Civil Rights Act to prohibit discrimination based on sexual orientation and gender identity. Only a third of respondents—31.6%—were opposed. 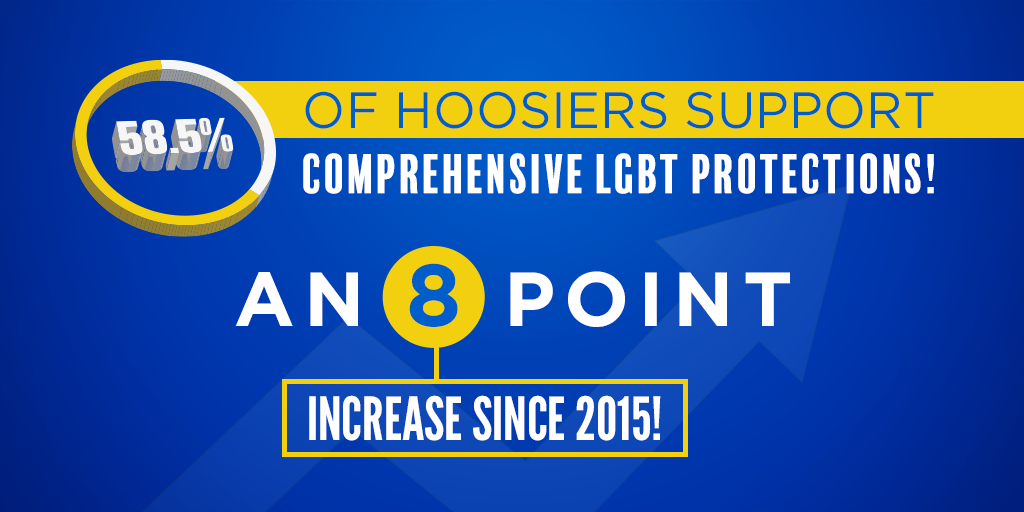 This is a dramatic increase of nearly 8 percentage points since the issue was last polled, in December 2015 by the IndyStar. That poll found that a smaller majority of 50.2% supported such an amendment, while 35.1% opposed.

Chris Paulsen, campaign manager of Freedom Indiana, said this new poll makes it clear that Hoosiers are ready to change the law. It’s up to lawmakers, however, to show that they are listening to the will of the people:

“Everyone who lives or visits Indiana should be treated equally and fairly under the law, and the majority of Hoosiers agree. This poll serves as an important reminder as we head into the 2017 legislative session that the public supports comprehensive statewide nondiscrimination protections for LGBT Hoosiers.”

This poll is also a clear repudiation of Indiana’s so-called “religious refusal” law—which allows businesses and other organizations to discriminate against lesbian, gay, bisexual and transgender individuals in housing, employment and public services—as well as any further legislative attempts to enact LGBT discrimination into state law.

That attempt to discriminate against LGBT Hoosiers has already cost our state millions of dollars in economic investment and thousands of jobs. We also saw our national reputation as a welcoming state known for its “Hoosier Hospitality plummet in the wake of the law’s passage.

Hoosiers are showing clearly that this is not the way forward for Indiana, and that it is well past time for comprehensive LGBT nondiscrimination legislation to be enacted statewide.