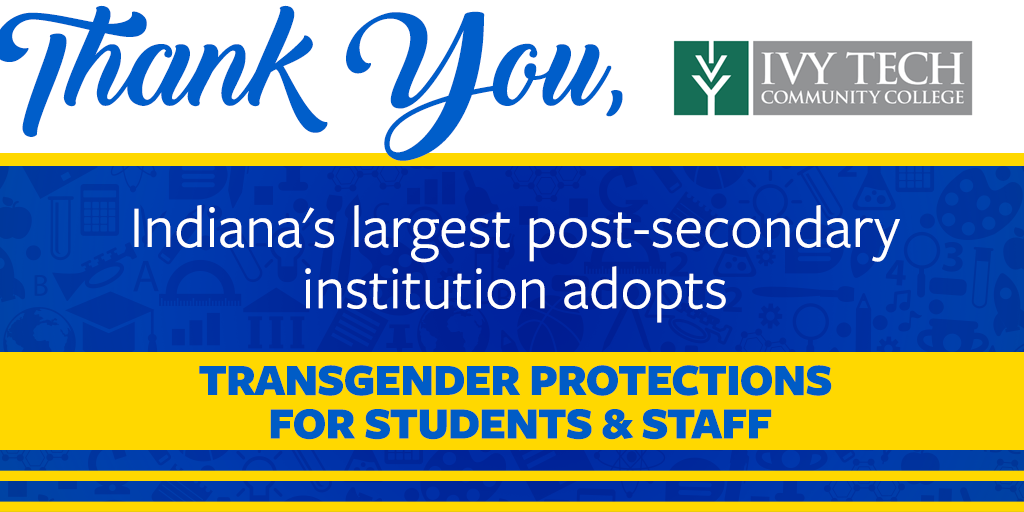 On Monday, Ivy Tech Community College released a transgender non-discrimination policy that will protect transgender and gender nonconforming students and faculty. Nearly 200,000 students on 33 campuses are served by Ivy Tech, making this change one that is likely to have a far-reaching impact in communities statewide.

Chris Paulsen, campaign manager for Freedom Indiana, quickly praised the school’s decision and encouraged other schools to adopt such protections.

“This is a strong policy that will ensure the students at Ivy Tech Community College can live, work and study as the person they truly are, without fear of discrimination. Freedom Indiana applauds Ivy Tech and encourages other colleges and universities across the state to adopt similar measures to ensure the safety and well being of every student.”

The policy was first publicly discussed by former lieutenant governor and the college’s current president Sue Ellspermann. It reads as a sort of “bill of rights” for transgender students, and concludes by affirming that “Ivy Tech Community College of Indiana is committed to creating a safe environment for all of its students and will take such actions as necessary to enforce this policy.”

Under the new policy, transgender and gender nonconforming students and faculty have the right to express their gender identity openly, or to keep it private. Students also cannot be denied the ability to use facilities that match the gender they live every day.

The policy also requires all school records to reflect the a student’s correct gender and name, and that all students be addressed by the name and pronouns that correspond to their gender identity.