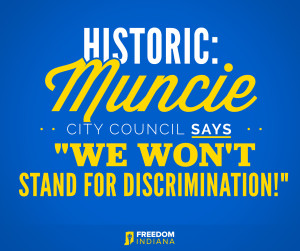 The vote was made during Monday’s meeting in light of the recent Religious Freedom Restoration Act (RFRA) signed into law by Governor Mike Pence. Because the original statewide RFRA allowed individuals and businesses a “license to discriminate” against gay and transgender Hoosiers, multiple large corporations and organizations spoke out against the legislation, making it clear that discrimination is not only bad for real Hoosier families—it’s bad for business and harms local communities.

That’s why last night, the City Council took bold action to ensure that LGBT Hoosiers are free from discrimination in their city.

Muncie Mayor Dennis Tyler said, “Is this unprecedented? Yes. I can talk about the businessman who called me this morning and said, ‘If we don’t fix this, we’re not going to consider Muncie.’”

In response, Mayor Tyler asked for and received additions to the city’s civil rights ordinance.

So long as discrimination remains on the books, leaders in Muncie fear that growth in the area—such as revitalizing of The Village or a major business and housing development near Ball State University—could be counteracted by RFRA’s negative backlash, and have encouraged the city to send a resounding message that Muncie opposes discrimination.