I Wanted a Safe Workplace In Which I Could Transition Kathrynne • Indianapolis
5 Moms Take a Stand for LGBT Equality with the Launch of Moms for Freedom December 2, 2015

Moms for Freedom is a group of mothers dedicated to the advancement of statewide comprehensive LGBT non-discrimination protections in 2016.

All of these mothers are the parents of gay or transgender children, or are LGBT themselves. Their commitment to the fight for full LGBT protections is rooted in their own, very personal experiences with discrimination. 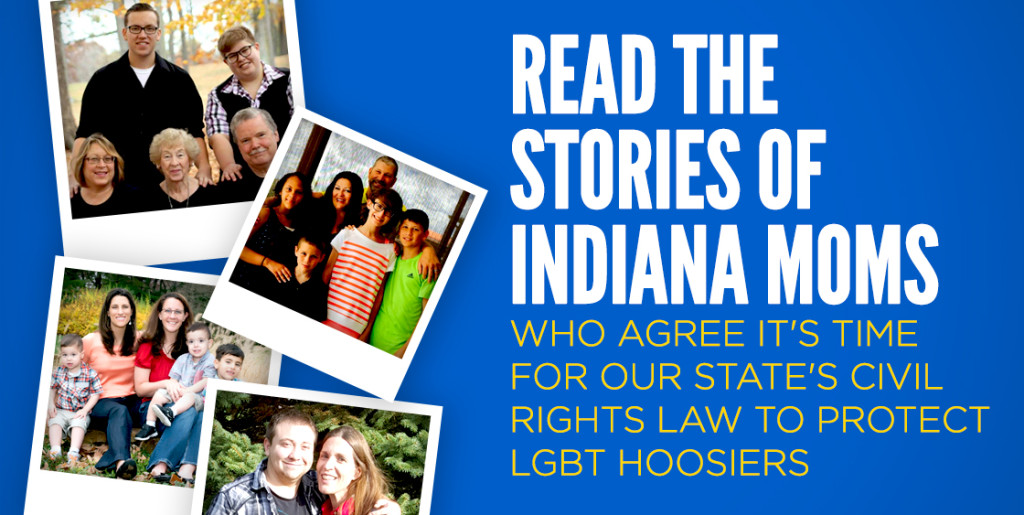 As our campaign manager, Chris Paulsen, aptly points out, this issue is more than election politics:

The words we’re asking lawmakers to include in our civil rights law [to extend non-discrimination protections to LGBT Hoosiers] are critically important to protecting people who live, work in and visit our state.

Two polls have separately confirmed that a majority of Hoosiers support updating the state’s non-discrimination laws to protect gay and transgender people in housing, employment and public places like restaurants, doctors offices and sports stadiums. And this support spans political party lines.

Moms for Freedom members Michelle and Stephanie—lesbian mothers of three sons—can confirm through personal experience that support for full LGBT equality is a non-partisan issue. Michelle shared her story:

Someone I used to work with, a devout conservative, as he got to know Stephanie and our family, he realized no one should be discriminated against.

We are Christians, we were both raised Christians, and we believe in treating other people as they’d like to be treated.

Despite overwhelming business support for this legislation, and consistent public support, discrimination is still a very real issue that impacts gay and transgender Hoosiers every day and carries real emotional and economic consequences.

For the launch of Moms for Freedom, 5 mothers of transgender children shared their stories to show the world what discrimination looks like for them.

For Moms for Freedom members, Leslie Barnes and Sheila York, full LGBT protections are fundamental to ensuring their sons can get jobs without the fear of being fired because they are transgender. Like every other Hoosier, Matthew and Drake just want to be afforded the opportunity to work hard and be judged on the quality of their performance, free of discrimination.

Other member moms, Krisztina Inskeep and Melissa Bickel, talk about how markedly happier their children were when they began living as their true identities. Krisztina says that despite her son’s daily struggle with unfair treatment at his school, he’s happier and “no longer tempted to end his life” now that he is living as a man.

When Melissa’s daughter, Olivia, started presenting as female, Melissa was impressed by how understanding and inclusive her friends were. She hopes to see the state legislature pass legislation to reflect the tolerance and acceptance of the next generation, saying: “Our kids are watching.”

These testimonies show that comprehensive LGBT non-discrimination is the kind of “pro-family” legislation that lays the foundation for happier, more welcoming and productive communities.

To read more stories from Moms for Freedom, click here.