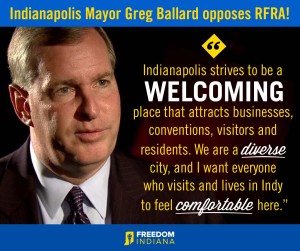 “I had hoped the Statehouse wouldn’t move in this direction on RFRA, but it seems as if the bill was a fait accompli from the beginning. I don’t believe this legislation truly represents our state or our capital city. Indianapolis strives to be a welcoming place that attracts businesses, conventions, visitors and residents. We are a diverse city, and I want everyone who visits and lives in Indy to feel comfortable here. RFRA sends the wrong signal.”

And there’s no doubt that the economic impact in Indianapolis would be significant—and instantaneous. Yesterday, Gen Con—the city’s largest convention which generates upwards of $56 million annually—threatened to relocate if Governor Mike Pence signs RFRA into law. And today, the Christian Church (Disciples of Christ) says if RFRA becomes law, they will relocate their 2017 convention.

The pressure is mounting—and it’s clear that Hoosiers of all political parties and backgrounds know that RFRA is a move in the wrong direction for our state. Click here to tell Governor Pence to veto this dangerous “license to discriminate bill”