Christian, Pastor, Grandfather and Supporter of Non-Discrimination in Indiana Rev. Larry Jackman • Columbus
City of Martinsville speaks out against discrimination through both Mayor and City Council April 9, 2015 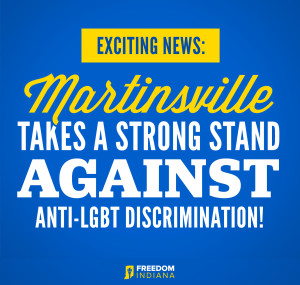 The City of Martinsville, IN sent a clear message to both the state and the nation that it will not stand for discrimination.

Although there has not yet been a definitive change in policy in Martinsville, these announcements are important for sparking change in the way that cities discuss the issue of discrimination.

After Governor Mike Pence signed into law Indiana’s Religious Freedom Restoration Act (RFRA) on March 26, allowing businesses and individuals to discriminate against gay and transgender Hoosiers under the guise of religion, multiple powerful corporations and organizations in the state spoke out against the legislation. In response, the legislature amended the bill to not undermine existing non-discrimination ordinances in 12 Indiana municipalities.

After the shake up caused by national press placing the Indiana bill under the spotlight, cities began to publicize their support of non-discrimination. On April 7, the Muncie City Council added discrimination protections to its civil rights law, and on April 8, the New Albany City Council voted for a resolution calling for a repeal of the statewide RFRA.  Martinsville adds to the list of cities taking a firm stance in support of inclusion for gay and transgender Hoosiers.

The fight against discrimination in Indiana will not cease until there is a statewide law forbidding discrimination of gay and transgender Hoosiers in housing, work and public accommodations. Make your voice heard by local legislators, and let them know that you will not stand for discrimination in this state we call home.