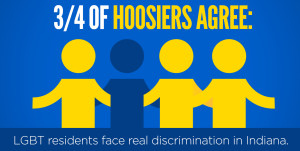 Results from a Bellwether Research & Consulting poll of over 1,000 Indiana voters shows that a majority consistently support non-discrimination protections for LGBT Hoosiers, specifically in public spaces like restaurants, shopping malls and sports stadiums.

Significantly, this poll reinforces a June survey. The report reads:

With results nearly identical to our finding in June, 55% support (35% strongly support) adding sexual orientation to the state’s civil rights law, while 33% oppose (22% strongly oppose). This consistency indicates stability of opinion, with intensity definitely on the side of those who support this change.

In addition to finding that a steady majority of voters support full LGBT non-discrimination protections, the poll shows that six in ten voters say businesses should not be allowed to refuse service on the basis of sexual orientation. Of this group, voters under 35 feel even more strongly with a strong 70% majority saying this type of discrimination in public spaces should be prohibited.

An increasing number of Hoosiers are acknowledging that gay and transgender people face discrimination; and this held across party lines:

Just 14% of voters statewide and 18% of likely Republican primary voters say LGBT residents don’t face discrimination. In fact, the majority (52%) of all voters think they face a great deal (14%) or some (38%) discrimination rather than a little (24%) or none.

Also, more voters than not associate anti-LGBT legislation like the RFRA bill—which allows businesses to deny discriminate and deny services on the basis of sexual orientation—with negative political consequences. Polling results show that 47% are “more likely to vote for a candidate for governor and for state legislature (46%) who supports adding sexual orientation and gender identity to Indiana civil rights law.”

These trends speak not only to Hoosiers consistent support for full LGBT non-discrimination protections, but their readiness to vote candidates in and out of office based on these values.

If you support the passage of full LGBT non-discrimination protections in 2016, click here to sign the pledge.