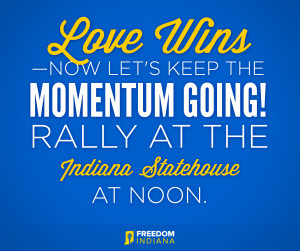 It just happened: The U.S. Supreme Court has affirmed the freedom to marry nationwide!

Today will forever go down in history as a day that moved America forward—as a day that bent the arc of justice that much closer to justice in all 50 states.

But here in Indiana, our work isn’t done. That’s why today at noon, hundreds of Hoosiers will rally together at the Indiana Statehouse to celebrate this victory—and show lawmakers that we aren’t stopping until Indiana law protects LGBT Hoosiers from discrimination.

Don’t miss this historic rally today on the steps of the Statehouse! Click here to let us know you’ll be there at noon.

It’s hard to believe that just a little over a year ago, our opponents were on the verge of amending Indiana’s constitution to permanently ban any and all protections for same-sex couples.

But we didn’t let them. We organized, we built coalitions—and we showed that when Hoosiers stand together for what we believe in, our impact is undeniable.

So today, we celebrate this victory. And we commit to harnessing that same grassroots power and dedication for securing non-discrimination protections for LGBT Hoosiers in 2016.

Rally with us today at noon on the steps of the Indiana Statehouse. Click here for details—and be sure to invite your friends.

Same-sex couples may be able to marry in Indiana. But day in and day out, hardworking LGBT Hoosiers face discrimination simply because of who they are.

I know you won’t stop fighting alongside us, %%Firstname(friend)%%.

See you soon at the Statehouse,