College scholar to leave Indiana if RFRA passes in House Morgan Mohr • Kokomo
Leading LGBT organizations call on lawmakers to pass the Fairness for All Hoosiers Act without delay! March 31, 2015 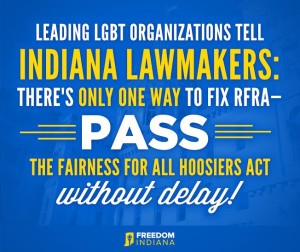 In an open letter to Governor Pence and leaders in the Indiana Legislature, yesterday national LGBT and civil rights groups called on lawmakers to take immediate action to repair the significant damage caused in the wake of RFRA being signed into law by passing Freedom Indiana’s bill ensuring that gay and transgender people cannot be discriminated against.

Introduced Monday morning by Freedom Indiana, the Fairness for All Hoosiers Act would ensure that RFRA could not undermine existing civil rights protections and would add sexual orientation and gender identity protections to Indiana’s civil rights law.

“Indiana is already on the verge of losing billions of dollars and thousands of jobs because of this dangerous law. Major organizations have announced they are cancelling conferences and companies are pulling business from Indiana to protect their employees and customers from discrimination,” the letter reads. “We want Indiana to be the thriving state that it can and should be, but that will never happen with state-sanctioned discrimination against LGBT people on the books.”

The backlash facing Indiana has been swift and severe, with businesses and organizations lining up to publicly condemn Indiana’s RFRA law. Some companies have even gone so far as to announce that they would be pulling their investment and jobs from the state. With potentially billions in investment and thousands of jobs on the line, the letter calls for immediate action in order to stop the fallout surrounding this controversial law.

“It’s time to show the rest of the nation that Indiana is open for business—for everyone.” And Indiana can do just that by passing the Fairness for All Hoosiers Act without delay the letter argues.