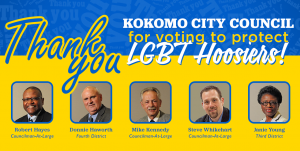 Yesterday the Kokomo City Council voted 5-4 to add comprehensive protections for gay and transgender Hoosiers to its Human Rights Ordinance. Kokomo’s HRO did not previously protect people from discrimination based on sexual orientation or gender identity.

Final passage of the amended ordinance was not assured. In the final days before the vote allies and opponents had mounted strong outreach campaigns. Yesterday the crowd that assembled for the final vote numbered in the hundreds and filled Kokomo’s council chambers to capacity.

We were once again reminded tonight what can happen when a community decides it wants to take action to protect its citizens from discrimination and send the message that it’s an open and welcoming place. In the face of scare tactics and misinformation from those who support legal discrimination, Kokomo did the right thing for gay and transgender people. We commend them.

Sadly, though, this action is a reminder that in most of our state, LGBT people still lack basic protections against discrimination that other Hoosiers currently have under our state civil rights law.

This decision out of Kokomo comes on the heels of a Feb. 23 decision by the Evansville City Council to similarly update its local non-discrimination protections.

Since the General Assembly again failed during the last session to take action on any legislation that would have expanded non-discrimination for LGBT Hoosiers, local victories like the ones in Kokomo and Evansville are an important way forward for ensuring that LGBT Hoosiers across the state are protected from discrimination.

While we applaud the Kokomo City Council and celebrate last night’s win for comprehensive LGBT non-discrimination protections, as Paulsen makes clear we must remain committed to passing these protections statewide.

You can click here to tell your legislators you support the simple solution: adding four words and a comma—“sexual orientation, gender identity”—to existing civil rights laws to address LGBT non-discrimination protections for all Hoosiers.