It is fair. It is right. It is time! Krisztina Inskeep

On November 17th, hundreds of Hoosiers rallied at the statehouse in Indianapolis in support of updating our state’s non-discrimination laws to protect LGBT people from discrimination. Krisztina Inskeep spoke to the crowd that day and delivered the speech below. 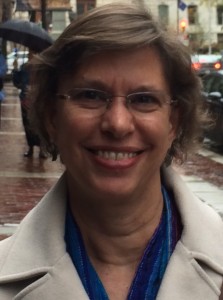 I come to you as a mother and grandmother. We are a normal, regular family. If you would have told me last year that I would be addressing you today, I would not have believed you. I am involved in this civil rights discussion because lack of statewide protections affects our family directly. You see, we have a transgender son.

Our son’s transition to outward expression of his inner certainty was rough. Though most of his depression lifted and he was no longer tempted to end his life when he realized his true identity as male rather than female, his anxiety continued to grow, fed and watered by the message from his school and others that he was somehow at best “mistaken,” at worst, “an abomination.” His high school would not call him by his affirmed, legal name. They refused to use his new name or preferred pronouns in class, programs, announcements, and rosters. This systemic bullying took a huge toll on our son’s self-esteem, confidence and peace of mind.

After high school, he worked for a year and lived in his own apartment in Indianapolis. He was smart, prompt, industrious, cooperative, and hard-working. He learned quickly, and helped customers figure out what they needed in a cordial, efficient manner. He was a model employee. He was also stealth.

Stealth is a term that applies to transgender people who do not let others know that they are transgender. There is a good reason for being stealth. Transphobia is still widespread. To be suspected or discovered is to be harassed, bullied, beat up, and worse. At least 21 trans people have been murdered in the US this year alone, an unfortunate record high.

This is not right!

Today, there is no legal recourse for this kind of insidious discrimination against families with LGBT children in the state of Indiana.

This is not right!

Having to hide his identity is a burden that takes its toll on our son every day. No wonder he is anxious! So much rides on being able to pass. And this harms our entire family, not just our son. I ask you as Hoosiers to make sure your legislators know how important it is to pass statewide protections that include sexual orientation and gender identity. Call your representative! Write to your state senator! Our children, our families, our friends and neighbors need this. These are not special protections. They are necessary protections for Hoosier families and for all our residents.
I call on Indiana’s General Assembly to do what is fair and right, and pass this pro-family legislation!