College scholar to leave Indiana if RFRA passes in House Morgan Mohr • Kokomo
It could be a few days away June 24, 2015 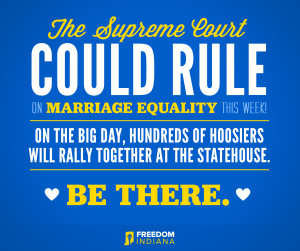 It’s almost hard to believe: A Supreme Court ruling on the freedom to marry is just days away.

It could happen tomorrow… or Friday… or Monday.. or even later.

In short: No one knows exactly when a ruling will be issued. But you can be sure once it is, Hoosiers will be ready to celebrate—and to commit to securing non-discrimination protections in 2016!

On the day the Supreme Court rules, rally alongside hundreds of Hoosiers at the Indiana Statehouse! Click here to let us know you’ll be there—and you’ll hear from us the moment a ruling comes down.

There’s no doubt that if SCOTUS rules in favor of marriage equality, we’ll have a lot to celebrate. But that’s certainly not the only reason we’re planning to rally.

We’ll be at the Statehouse on the big day because we know that even with a landmark ruling, we won’t be done.

We’re rallying because we need to make it crystal clear to lawmakers that no Supreme Court ruling on marriage changes the dire reality in Indiana—that under state law, LGBT Hoosiers endure discrimination each and every day simply because of who they are.

We’ll need you there as we harness the momentum from (what we hope will be) a historic ruling to ensure 2016 is the year we win LGBT non-discrimination protections in Indiana.

Don’t miss out. Click here to say you’ll join us at the Statehouse on the day the Supreme Court rules—and we’ll be in touch with details immediately after the ruling is issued.