I Wanted a Safe Workplace In Which I Could Transition Kathrynne • Indianapolis
Latest IndyStar Poll Shows Strongest Support Yet for LGBT Non-Discrimination December 21, 2015

In an IndyStar poll conducted with Ball State University, a majority 54% of polled voters said it’s more important to protect the civil rights of all individuals than the religious freedom of people who object to providing services to gay, lesbian, bisexual and transgender people. Meanwhile, a larger majority (56%) said there was no conflict between their religious beliefs and homosexuality.

Still more impressively, support jumped to around 70% when the questions were reworded to break down specific types of protections that would be extended to LGBT people under legislation currently pending review. 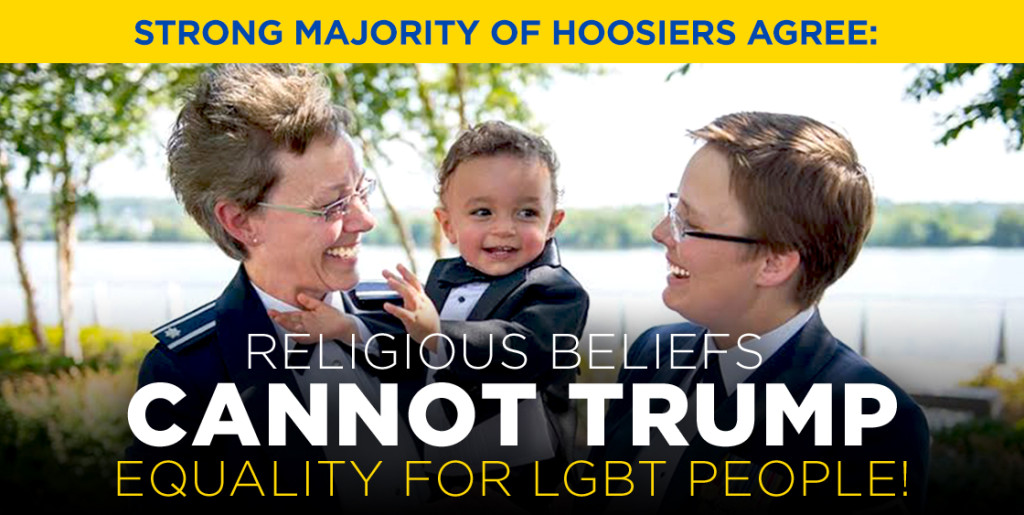 As our own faith coordinator, Danyelle Ditmer, explained, non-discrimination is about more than just wedding cakes and floral arrangements—it’s about the ability to find work, secure housing and receive medical services:

For me, you offer those services with the love of Christ in your heart, and serve the people who are there and serve them well. I just don’t think religion loses anything by offering public services.

This latest data is consistent with findings from two other polls conducted earlier this year. A June poll commissioned by Bill Oesterle—founder of Angie’s List and Tech for Equality, a coalition of tech companies pushing for comprehensive statewide LGBT protections in Indiana—found 54% support. While the annual Hoosier Survey more recently showed that 56% of polled Hoosiers are in favor of fully-inclusive non-discrimination protections.

The percentage of people who oppose updating state civil rights laws to include LGBT Hoosiers has fluctuated between 32% and 36%.

This consistency in polling results over time suggests sustainable and authoritative support for comprehensive non-discrimination laws.

Another remarkable finding is that majority support holds across a number of categories: region, population count and age. Regardless of whether one lives in northern or southern Indiana, rural or urban, respondents favored passing full LGBT non-discrimination legislation over religious exemptions.

Support was strongest among young adults and the 55 to 64-year-old demographics. And while women and Democrats were most likely to support LGBT rights, the issue continues to divide the Republican party.

Tell your lawmakers you stand with a strong majority of Hoosiers and urge the passage of comprehensive LGBT non-discrimination protections in 2016.

The IndyStar poll, conducted with Ball State University’s Bowen Center for Public Affairs, surveyed 600 adults living in Indiana. It has a margin of error of plus or minus 5.2 percentage points. The statewide survey was conducted by Princeton Survey Research Associates International and analyzed by the Bowen Center.