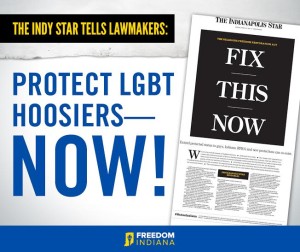 This unprecedented action by the Indy Star underscores how grave the situation facing Indiana is, where the paper published in big block letters “Fix This Now.”

The Indy Star did not hold back, beginning their editorial by writing “We are at a critical moment in Indiana’s history. And much is at stake.”

Then the IndyStar systematically lists each of the threats Indiana faces after Governor Pence signed this disaster of a bill into law.

Our image. Our reputation as a state that embraces people of diverse backgrounds and makes them feel welcome. And our efforts over many years to retool our economy, to attract talented workers and thriving businesses, and to improve the quality of life for millions of Hoosiers.

All of this is at risk because of a new law, the Religious Freedom Restoration Act, that no matter its original intent already has done enormous harm to our state and potentially our economic future.”

Perhaps in acknowledgment to Governor Pence’s expected press conference today at 11am where he is expected to announce what many believe to be a half-hearted attempt to fix this bill, the IndyStar writes, “Half steps will not be enough. Half steps will not undo the damage.”

The editorial then calls for bold action that will indicate to the rest of the country that Indiana does not stand for discrimination. The only solution IndyStar finds acceptable is to pass a bill ensuring that RFRA will “prohibit discrimination in employment, housing, education and public accommodations on the basis of a person’s sexual orientation or gender identity.”

Immediately, the IndyStar rebuffs critics by pointing to other states that have a RFRA and common-sense non-discrimination protections to argue that yes, in fact, the two can coexist. In fact they do in states across the country.

Nor will protecting gay and transgender people from discrimination cause any negligible impacts to the state the IndyStar argues, pointing to an Indianapolis ordinance that has been on the books for nearly a decade.

“The city’s human rights ordinance provides strong legal protection — and peace of mind —for LGBT citizens; yet, it has not placed an undue burden on businesses.”

Then the IndyStar makes clear that it has had enough with the capitulation by the Governor and RFRA’s defenders. If the state is to heal and move forward, bold action must be taken now.

Governor, Indiana is in a state of crisis. It is worse than you seem to understand.

You must act with courage and wisdom. You must lead us forward now. You must ensure that all Hoosiers have strong protections against discrimination.”

And not to leave any prisoners behind, the Indy Star concludes that both RFRA and nondiscrimination can coexist, along with straight and LGBT Hoosiers.