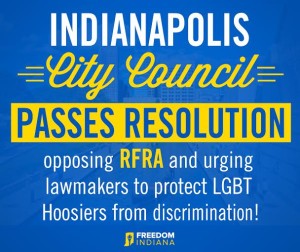 Coming on the heels of Indianapolis Mayor Greg Ballard announcing today in a press conference his opposition to the so-called Religious Freedom Restoration Act (RFRA), tonight, the Indianapolis City Council passed a bipartisan resolution 24-4 voicing their opposition to RFRA.

The resolution, which was endorsed by the Indiana State Chamber of Commerce, also calls on the Indiana General Assembly to update existing state civil rights law to ensure that gay and transgender Hoosiers cannot be discriminated against.

The Republican Mayor of Indianapolis isn’t the only conservative to speak out forcefully against RFRA. In light of the nationwide-backlash facing the state of Indiana, several Republican legislators in the General Assembly have acknowledged publicly that RFRA needs to be fixed to ensure it cannot be used as a weapon to discriminate against others.

With the chorus of opposition to RFRA growing louder by the hour, it’s time our elected leaders took notice and started to work towards undoing the immense harm they’ve unleashed on our state. They can begin by passing the Fairness For All Hoosiers Act which will ensure that no Hoosier can face discrimination due to their sexual orientation or gender identity.