Today the Indiana Urban Mayors Caucus—which represents 32 cities across the Hoosier State with populations of more than 30,000—unanimously endorsed legislation updating the state’s civil rights law to prohibit discrimination on the basis of sexual orientation and gender identity. Furthermore, the Mayors called on lawmakers to ensure that any legislation advancing this year allow local municipalities to retain their own civil rights ordinances. 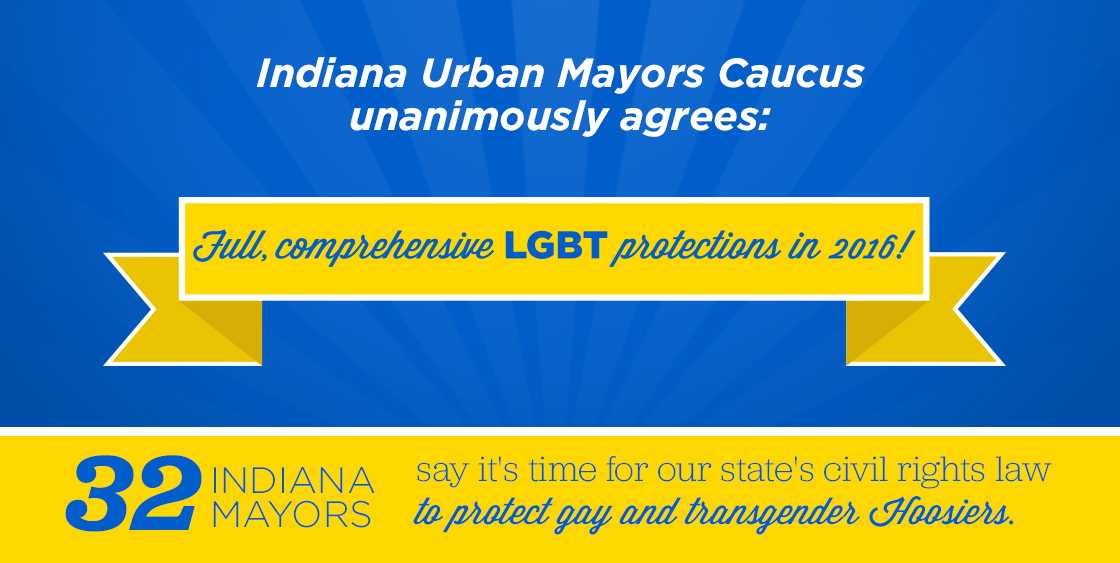 SB 344—which will be considered on 2nd reading in the Indiana Senate tomorrow—would invalidate any local civil rights law passed after December 15, 2015 and prevent any future ordinances from taking effect. This short-sighted bill also lacks any and all protections for transgender Hoosiers, leading many local leaders to consider it a non-starter—and certainly not the final solution for LGBT civil rights in Indiana.

Indianapolis Mayor Joe Hogsett urged lawmakers to not strike down civil right laws like the one that has been on the books in Indianapolis for more than 10 years:

“We believe as local elected officials that we should retain the right to work together to enact civil rights protections that make sense for our communities. Many cities and counties across our state already have civil rights ordinances in place that assure the equal treatment of gay and transgender people.
“Those ordinances have been used for years to promote economic development and make residents and visitors feel safe and welcome. Updating the state civil rights law should not eliminate existing local protections or prohibit local elected officials enacting such protections in their home communities in the future.”

“We understand that this is a difficult process, and we empathize with state lawmakers as they undertake this debate. As Mayors, we all know how hard it is to pass these protections locally. It takes a robust community conversation and a chance for everyone to weigh in.”
“We want to be part of that discussion at the Statehouse and offer our support to lawmakers in a way that helps them strike a balance between what many of us already have accomplished in our communities and a statewide solution.”

Thanks to these Mayors for standing with the majority of Hoosiers who agree: Our state and our communities are stronger when everyone is protected from discrimination!
Tomorrow at 1:30pm, the Indiana Senate will hold 2nd reading on SB 344. Click here to tell your lawmakers: Fix this bill to ensure full, comprehensive protections for LGBT Hoosiers!
SHARE THIS STORY