College scholar to leave Indiana if RFRA passes in House Morgan Mohr • Kokomo
Hoosiers Testify to Lawmakers on Why They Must Pass LGBT-Nondiscrimination Protections in 2017 August 30, 2016

Today, LGBT Hoosiers, business leaders, faith leaders and other allies from across the state stood in front of a committee of Indiana lawmakers to make the case for why the state needs to adopt nondiscrimination protections based on sexual orientation and gender identity. 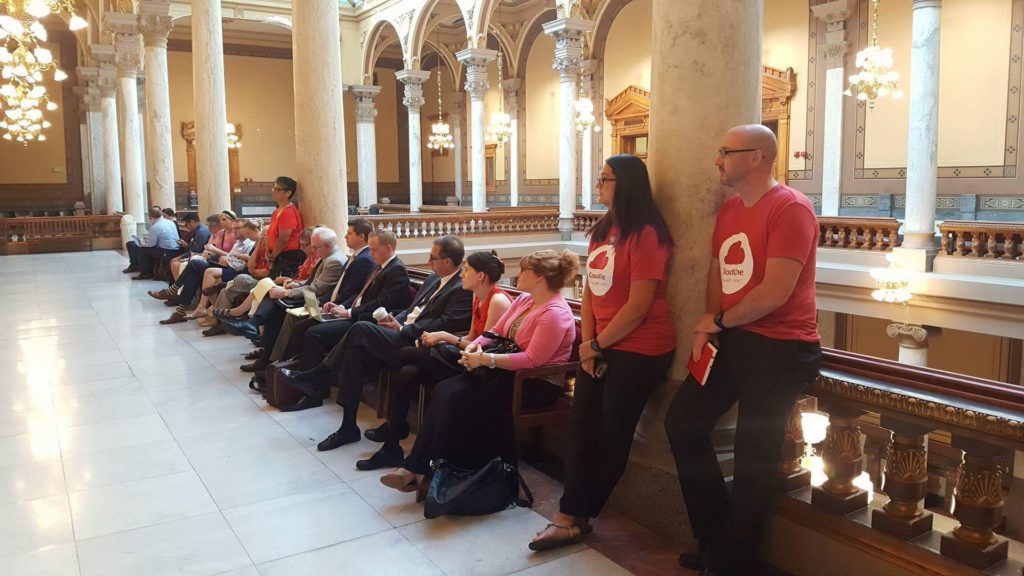 Many shared what it’s like to live with the constant worry—and day-to-day experience—of being discriminated against because of who they are or who they love. Business leaders in particular spoke about the challenges of promoting economic development in a state that now has a reputation for being unwelcoming toward LGBT people.

Here are their stories:

Lane Banister is the education program coordinator at the Indiana Youth Group and is himself transgender, so he knows very well the kinds of struggles transgender young people face in Indiana. He spoke at length to lawmakers about the bullying and other threats—both at home and at school—that transgender kids experience on a daily basis. These include the threat of suicide. In his testimony, Lane told lawmakers that Indiana’s teen suicide rate is the highest in the country (30% attempted or seriously considered suicide), and that transgender teens attempt or seriously consider suicide at four times the rate of their peers. 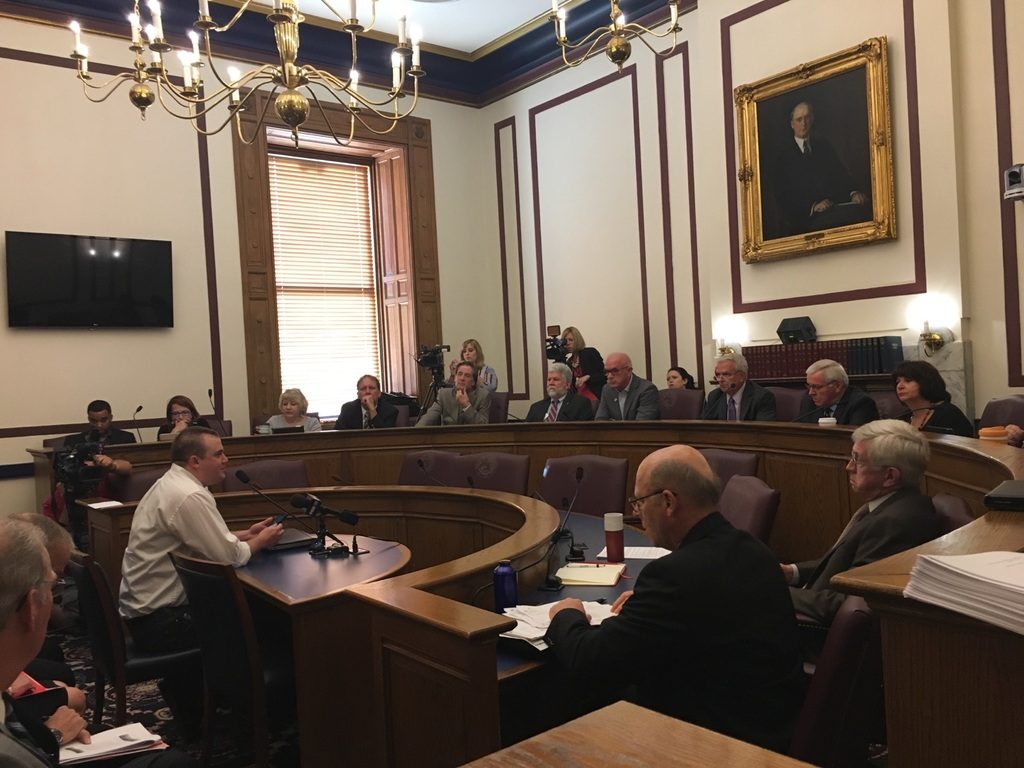 In his closing statement, Lane told lawmakers that they must not pass up another opportunity to truly change the lives of transgender youth in the state:

“My youth are strong, and they have each other. We do everything we can to protect them, help them find opportunities, build lives, leave bad family situations and start over from nothing. Our community will find a way to thrive. But I can’t stand to lose any more in the process. And my heart breaks for the struggles our youth face daily. You have the power to protect them.  You can show them that Indiana cares for them and they belong here.”

Korvin Bothwell is the owner of VitalSkates, a skate shop in Indianapolis. He spoke at length to lawmakers about how he came out to his friends, family and community as transgender, and how the process and be all at once isolating and empowering. Korvin said he had always been a private person, and that even during his transition, the experience was very personal and he wanted it to be “as quick as possible.” 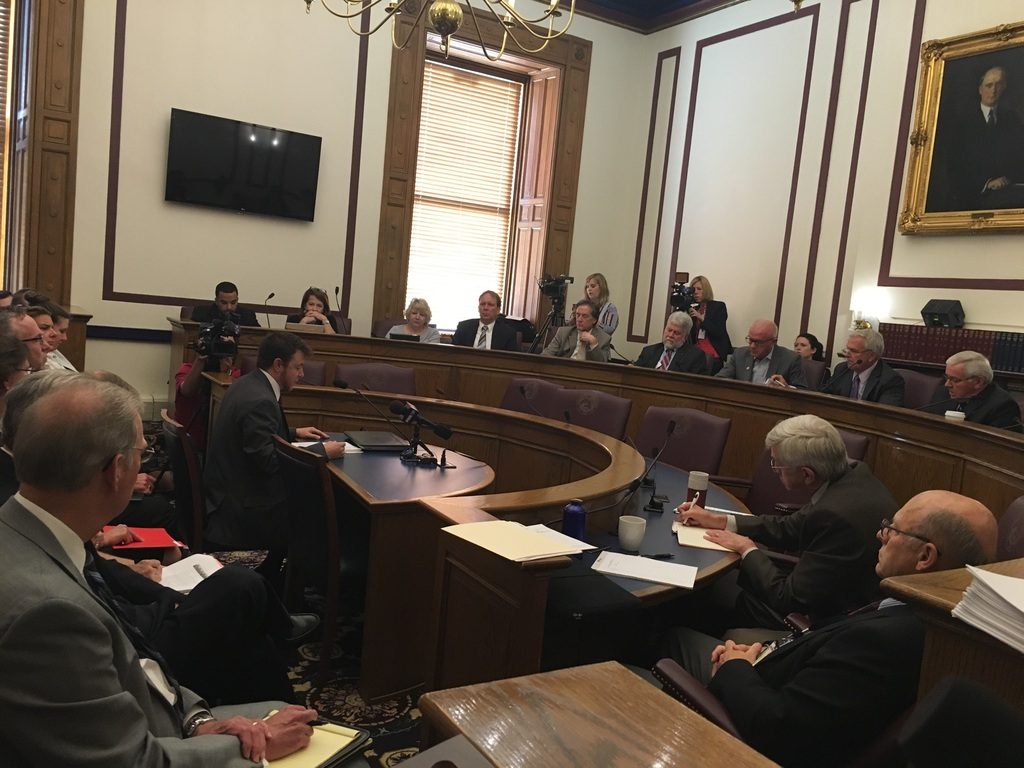 That tendency toward privacy, he said, changed in April of 2015, when he heard of a young transgender kid who had committed suicide after starting the process of coming. Korvin felt a connection with this boy not just because of their shared transgender identity, but because the boy played roller derby—just like Korvin. After that, Korvin knew he needed to share his story, including with lawmakers.

“Suddenly my privacy seemed very selfish to me. What gives me the right to hide my experiences? My life isn’t all rainbows and lollipops but it’s far away from the desperation of suicidal ideation. Who am I to hide when my civil rights are up for grabs? Who am I to let the next generation sort this out on their own while trying to sort out their personal lives?”

Jeff Bower is a priest in the Diocese of Indianapolis and serves as a rector at St. John’s Episcopal Church in Speedway. At the beginning of his testimony Jeff listed the many things that make him the same or different from other Hoosiers: the fact that he is a theologian, but also a philanthropist, and a businessman. 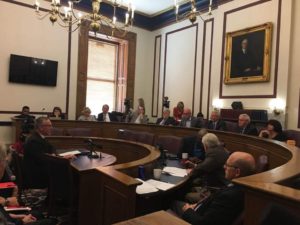 Jeff is also gay. But, he told lawmakers, from his view as a “child of God,” all of these things that make no two people alike—including sexual orientation and gender identity—are things to be celebrated. His faith teaches him that whatever God creates is good, and that in failing to celebrate our differences, we make it harder for people to love God and one another. He said all people deserve equality under the law not just because they are God’s children, but because they are protected by the Constitution.

“As a leader in Christ’s Church, I stand before you today, to say simply that there is so much more to me and my LGBT brothers and sisters, than our sexual orientation. As children of God, we are of value and contribute in a myriad of ways to the fabric of our communities and the greatness of our state.”

During her testimony this morning, Vanessa Enos Quintana told lawmakers her life changed the moment that lawmakers passed the Religious Freedom Restoration Act. In 2014 she married her wife—twice, with the second time being recognized by the state. In 2015, when the Supreme Court ruled in favor of marriage equality, she finally felt peace of mind knowing that should anything happen to her, her wife would be legally empowered to make decisions for her.

Then, in March of 2015, that all changed. No longer did Vanessa feel the same piece of mind. That night she and her wife were out on the town, and she wondered what they would do if a restaurant refused to serve them. How would she protect her wife? She also spoke to lawmakers about her faith, and how it drives her to love even those who reject her. She hopes that during the next legislative session, lawmakers will chose love over hate as she has.

Shannon Heider is the Director of State Government Relations at Cummins, which is headquartered in Columbus and employs thousands of Hoosiers. She spoke to lawmakers about how intense the competition is to recruit workers who have the technical skills that Cummins needs—even more so now that the company is experiencing a huge generational shift in its workforce, employing more millennial workers than ever before.

She says the new generation of workers, more than ever before, values the quality of life they will have with a company. She says Cummins spends a lot to invest in employee development that helps the company and the employee, because Cummins truly cares about its workforce. This caring, she told lawmakers, has also driven Cummins to want to protect employees—by creating internal policies that protect LGBT people from discrimination, and by honoring employee requests to transfer to states that have such protections in place.

“With all the negative attention Indiana has received, we have lost strong, high-performing employees who have cited the negative perception toward the LGBT community as their reason for leaving. They do not want to develop their careers in a state that is perceived as unwelcoming to them. … We need to make sure that all LGBT community members are protected including transgender individuals. ”

Krisztina Inskeep described herself to lawmakers as a “concerned mom” of five, including her transgender son. Krisztina described to lawmakers the “14 more years of misery, depression, anxiety and worse” that followed the day her son started to question his gender identity. She said if she had known more about gender identity—and if public laws and policies had been more accepting of her son—life could have been easier for both of them. 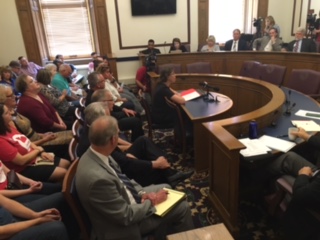 She told lawmakers that as a parent, she is horrified by the statistics showing that 41 percent of transgender people attempt suicide in their lifetimes, and that number increases when parents are unsupportive. Those who are unsupported at home, she told lawmakers, frequently have a hard time finding support in schools or other public places because Indiana lacks legal protections for them. She said it’s up to lawmakers to change this.

“Do the right thing before any more Hoosiers are harassed, bullied, fired or discriminated against in any other way. Pass a law that prohibits discrimination against LGBT Hoosiers.  Include sexual orientation and gender identity in our civil rights protections. Other states have done it. Show my son, our family and the thousands of Hoosier families like ours that we value one another, and yes, that includes them!”

Michael O’Connor is the Director of State Government Affairs for Eli Lilly and Company. During his testimony, he shared concerns from Eli Lilly’s human resources department—namely, that RFRA has made attracting talented workers more challenging.

O’Connor told lawmakers that many new hires and potential recruits are not clear on where the state stands on LGBT rights. Many are very sensitive to the issue, and are wary of moving to or staying in a state where the status of their civil rights is in question.

“In the end, we believe we are long past the time where our state needs to stand up firmly and say, ‘no one who resides in our Hoosier State, nor any of our guests, should be subject to the potential of discrimination.’ Any statement or legislation that does not make it clear that we stand against any potential discrimination is simply not enough!”

John McDonald is the CEO of CloudOne Corporation in Fishers and also serves on the board of directors at TechPoint, the Venture Club of Indiana, and the Indiana Chamber of Commerce—so to say he knows exactly what the tech sector in Indiana needs to grow is no understatement.

CloudOne is on the cutting edge of a growing part of the tech sector know as the “Internet of Things,” and is itself a rapidly expanding company. The company has grown its employee base in Indiana by 720% since moving to the state. 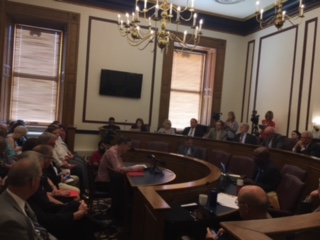 But, as John told lawmakers this morning, “that growth must be fed”—by skilled workers. He told lawmakers that his company’s growth was put in jeopardy in March of 2015, when the legislature passed the Religious Freedom Restoration Act. He worried the legislation would make it harder to compete for talent with companies headquartered in places like New York, where such nondiscrimination protections are already on the books. He also worried, he told lawmakers, it could devastate the state’s whole economy.

“The ramification to CloudOne was also clear: in the marketplace of talent where we compete with New York, Atlanta, Denver, San Francisco—even Chicago, from where we moved CloudOne—there can be not a shred of doubt in anyone’s mind that Indiana is a welcoming and inclusive place to live and work. Said simply, Indiana is not, and never can be, a place for discrimination in any form—especially that practiced by business and allowed by government.”