As the national conversation coalesces around transgender non-discrimination policies—and specifically, how those policies impact transgender students—many schools have been making a point to reiterate their commitment to equal treatment.

In this regard, Indiana’s top post-secondary institutions stand out. Most explicitly prohibit discrimination based on gender identity and expression, and some even go several steps further. 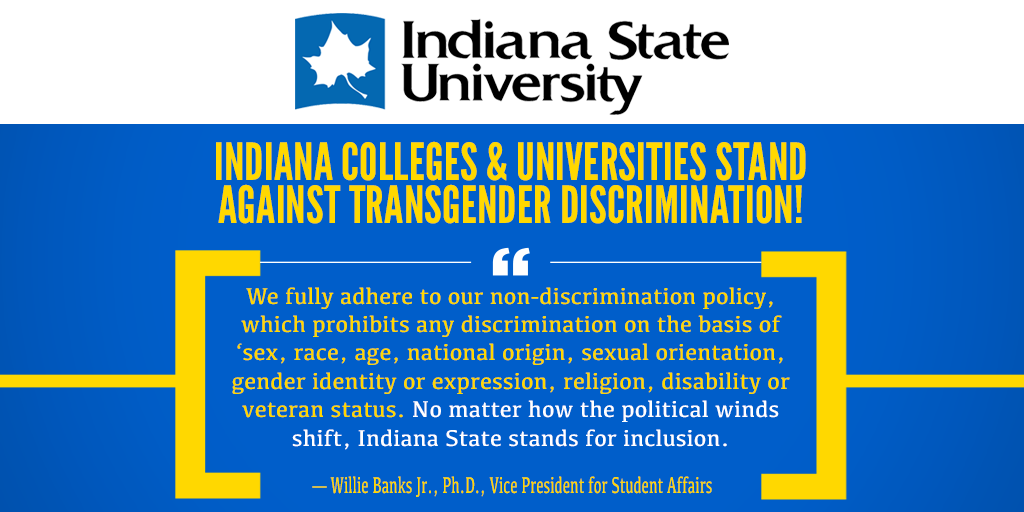 Indiana’s two largest public university systems, Indiana University and Purdue University, both have broad policies that prohibit discriminating against “any member of the University community” (Purdue) and say the schools must “recruit, hire, promote, educate, and provide services” (IU) without regard to a person’s gender identity. IU’s policy also goes beyond merely prohibiting discrimination, and commits the University to taking “positive” action to help students “overcome the discriminatory effects of traditional policies and procedures.”

ISU’s Vice President for Student Affairs, Willie Banks Jr., said that the Trump Administration’s rollback of guidance on how transgender students should be treated under Title IX of the Education Amendments of 1972 specifically pushed the University to publicize its policy more widely.

“No matter how the political winds shift, Indiana State stands for inclusion. We offer support to our diverse student body, so they feel connected to their communities and can thrive on campus and academically. Further, we aim to enhance intercultural competency and actively work with and for all Indiana State students to embrace our differences.” –ISU VP for Student Affairs Willie Banks Jr.

Indiana’s top private universities are also making transgender non-discrimination a priority. DePauw, Butler, the University of Indianapolis and the Rose-Hulman Institute of Technology all explicitly prohibit gender identity discrimination in their student handbooks.

The University of Evansville goes even further to protect transgender students by providing gender neutral housing:

“Through mindful collaboration, diligence, and dialog, the University of Evansville continues to try and create and withstand a diverse learning community, one in which we can model leadership that moves us beyond tolerance, but instead to an understanding of our global humanity and a respect for diversity and all of its facets. This includes the thoughtfulness and consideration of a person’s internal sense of being male, female, or something else as well allowing campus members to communicate through their behavior who they want to be, all while celebrating our differences.” –Evansville University Chief Diversity Officer LaNeeça Williams

Freedom Indiana commends our state’s institutions of higher learning for their commitment to fostering an inclusive, welcoming environment for transgender students.

However, students shouldn’t lose these critical protections when they step off campus. That’s why it’s important for cities and the state as a whole to pass comprehensive, LGBT-inclusive civil rights laws that protect all Hoosiers from discrimination, regardless of their gender identity.