“As Americans, I feel like this denies us the freedom we all deserve.” Angie and Cynthia Alexander
Heading Into A Weekend of Celebration, Hoosier Veterans Tell What It’s Like to Serve As An LGBT Person June 30, 2016

This weekend, all Americans will be celebrating the freedoms they hold dear—the freedom to go to work, fall in love, and raise a family without being subjected to discrimination. The LGBT community will be celebrating like everyone else, although it will be a celebration tempered by the fact that in many ways and many places, our freedom is not complete.

Private First Class Darrell Blasius served in the United State Army from 1971-1974 as an x-ray technician. More than 40 years later, Darrell says his service still has a profound impact on him. He says not only did the Army provide him with a career, it taught him respect and discipline. Although Darrell has gone on to have a successful life with his partner Bruce, he feels passionately that many veterans don’t get enough support when they get home. 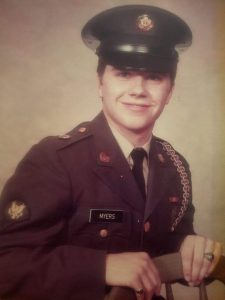 “I’m proud of what I did. I think that everyone should go through basic training because it makes you a better person. [But] we aren’t helping vets enough, considering what they’ve lost. We need to do better.”

Although serving our country—and accessing care once they get home—has been difficult for LGBT veterans, for many it hasn’t dampened their loyalty or desire to serve, or changed their view of themselves as a veteran.

For Scott Spychala, a 20-year veteran of the United States Air Force, the uniform still feels like an integral part of who he is. However, Scott—who was in a serious relationship while he served—found it harder and harder to serve in the face of Don’t Ask Don’t Tell. He retired in 2003. Soon after, he was recruited by the Human Rights Campaign to organize Hoosier veterans against the discriminatory policy. And he didn’t have to hide his identity anymore. 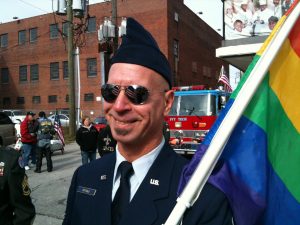 “After marching in the Chicago Pride Parade I never felt freer. Everytime I put on my uniform I feel i can be who I am. I am a veteran first and gay second. I still love to carry the colors whether it be red, white and blue or six COLORFUL stripes.”

Scott is now the president of Indiana chapter of American Veterans for Equal Rights.

For transgender Hoosiers, serving in the military has been an especially fraught choice. Even after Don’t Ask Don’t Tell was repealed in 2010, transgender people could not serve openly. But that changed today when Secretary of Defense Ash Carter announced the Pentagon would be lifting the ban on transgender service.

For Cameron Elliott St. Andrew, that policy has, up to now, made his service a bittersweet endeavor. What makes it bitter is not being able to serve under his real identity—but what makes it sweet, he says, is leading, training and mentoring soldiers. 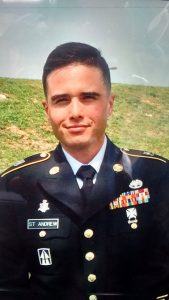 “My service is dedicated not only to this country and to my community, but to the soldiers to my left and right.”

Until today, transgender servicemembers not only had to grapple with the complex feelings of serving an institution that doesn’t recognize their existence—they also had to keep that existence hidden or risk being discharged.

That’s what happened to Maxwell Atlas Hedon. Maxwell joined the military because he wanted to serve a purpose and be a productive, upstanding member of society. He also thought he’d learn new skills. He served despite being classified as female by the military, even though it didn’t feel right to him. 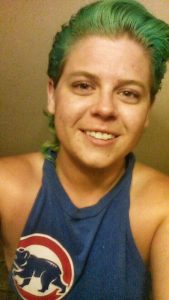 “How does it make sense that you let me serve my country, and serve you dinner, and you still don’t want to serve me some non-discrimination protection?”

After discharge, and in the face of further discrimination in the workplace, Maxwell has refused to let others’ lack of understanding define him. He now serves as the president of Gender Warriors in Evansville, and is an outspoken advocate for transgender people in his community.

Brian Ayres, a United States Marine, also expressed this feeling of dehumanization. But he also said that part of his service—not being able to serve openly—gave him the resilience and perseverance to be the person he is today.

“When I enlisted in the Marine Corps, I signed my name on a line that indicated I would give my life for a country that didn’t recognize me as a person. One of my favorite sayings is, ‘We’re all just a different shade of green, but we all bleed the same blood.’ Being trans may make us a different shade of green than other servicemembers, but it doesn’t make us any less capable of kicking ass.”

Freedom Indiana would like to thank all servicemembers and veterans during this weekend of celebration—and extend an especially heartfelt thanks to those who were not able to serve openly until today.