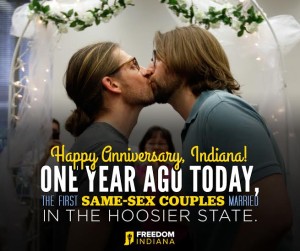 One year ago today, history was made when a federal judge struck down our state’s marriage ban.

And for the first time in Hoosier history, loving and committed same-sex couples legally wed right here in Indiana.

Winning the freedom to marry in Indiana wasn’t easy. And from our campaign to defeat the anti-marriage constitutional amendment (HJR-3) to the countless appeals and days in court to fight Indiana’s marriage ban, we know that we won for one reason and one reason alone—we built a movement.

So as we celebrate the one year anniversary of the first marriages for same-sex couples in Indiana, it isn’t lost on us that another historic ruling—one that could lead to the freedom to marry nationwide—could come as early as tomorrow.

When the Supreme Court rules on marriage, plan to join us that day at noon for a rally at the Statehouse to celebrate this pivotal ruling, and push towards a statewide non-discrimination law. Click here to let us know you’ll be there.

Today, across the state of Indiana, hundreds of families are rejoicing as they celebrate their one-year anniversary in marriage. But the fight for marriage equality is only the beginning.

So long as Hoosiers can be fired, denied housing or refused service simply because of who they are, we must continue to fight.

That’s why when we join together on Decision Day at the Statehouse, we will be celebrating this historic victory—and pushing for a future where we are all equal under the laws of Indiana, no matter what.

On the day the Supreme Court rules on marriage, join us at noon for a rally at the Indiana Statehouse. We’ll take our message directly to lawmakers and ensure that here in Indiana, all are welcome.