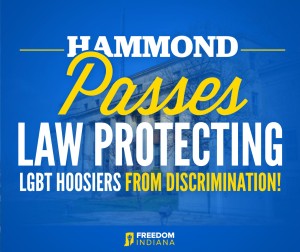 Joining the momentum, Hammond becomes the latest city to pass a non-discrimination ordinance ensuring gay and transgender people cannot be discriminated against.

The Mayor of Hammond, Thomas McDermott, Jr., posted to his Facebook account that he was “Very proud to sign Ordinance #9293 into law in Hammond: an Ordinance Prohibiting Discrimination Based upon Sexual Orientation & Gender Identity.”

The ordinance reads “Legalized discrimination, in any form, does severe social and economic harm to the State of Indiana,” and then goes on to list just some of the ways Indiana’s pro-business reputation has been tarnished in the aftermath of RFRA being signed into law including Angie’s List pulling investment from our state, GenCon canceling their multi-million dollar conference and states like Illinois taking advantage of the opportunity to try and siphon investment from our state.

Hammond joins the city of Muncie, which also recently passed a non-discrimination ordinance following the fallout over RFRA, while the city of Martinsville issued a proclamation declaring their city open to all and the city of New Albany, which already has an ordinance on the book, approved a resolution voicing their opposition to RFRA.

Resolutions like the one that just passed in Hammond and the one that passed two weeks ago in Muncie signal that local municipalities are taking serious the threat of losing investment and jobs, should their city not ensure all residents are protected from discrimination.

When the so-called Religious Freedom Restoration Act was amended in the legislature, it was updated to include that the new law could not be used to water down existing civil rights protections. However, since most cities in Indiana have not yet passed a non-discrimination ordinance that includes protections on the basis of sexual orientation or gender identity, many Hoosiers are still woefully unprotected. Ordinances like Hammond’s are a step in the right direction, but Hoosiers may fall through the cracks unless the legislature passes a statewide law ensuring that no one can be discriminated against because they are gay or transgender.

Follow Freedom Indiana on Facebook and Twitter to stay up to date on the latest as we work to pass a statewide non-discrimination law that includes sexual orientation and gender identity in Indiana.