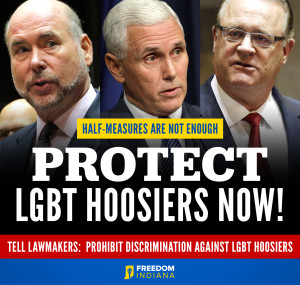 Half steps won’t cut it.

This morning, legislative leaders and Governor Mike Pence announced they’ve reached a supposed “compromise” on RFRA. But trust me: this is no compromise.

The agreement published by the Indy Star includes NO protections for LGBT Hoosiers and addresses only some of the serious concerns in RFRA. Under their supposed “compromise” RFRA can still be used to undermine critical existing civil rights protections.

The last six days have been an unprecedented nightmare for the state of Indiana. Why? Because lawmakers jammed through a shameful, dangerous law—hoping no one would notice.

Apparently they haven’t learned their lesson. Because now, legislative leaders and the Governor are scrambling to cut a quick inadequate deal, in hopes that they can wipe their hands clean and simply move on.

But six days of national spotlight have made one thing undeniably clear: RFRA is—and has always been—about discrimination. And Indiana’s reputation and economy have suffered nearly irreparable damage.

They think we’re going to back down and accept this half-fix compromise. But we won’t.