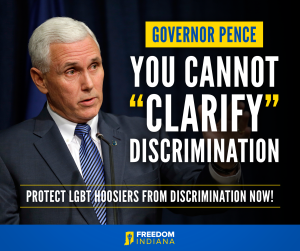 Governor Pence can’t have it both ways.

Moments ago, the Governor spoke on This Week with George Stephanopoulos to supposedly “clarify” the intent of the so-called Religious Freedom Restoration Act that he signed into law last week.

But even on the national stage, Governor Pence dodged one simple question: Does Indiana’s RFRA law allow for discrimination against LGBT Hoosiers?

If this isn’t about discrimination as the Governor insists, the answer should be simple. But that’s because there is nothing to “clarify” here. RFRA is—and has always been—about legalizing state-sanctioned discrimination against LGBT Hoosiers.

If the Governor truly wants clarity, here’s what he can do: Ensure that Indiana law protects LGBT Hoosiers from discrimination—and that RFRA cannot be used to undermine local or statewide civil rights law.

Tell Governor Pence: It’s time to show the world that Indiana is open for business—for everyone. Click here to send a message urging him to protect LGBT Hoosiers from discrimination.

Governor Pence can’t say we didn’t warn him. Tens of thousands of Hoosiers and our state’s leading business voices spoke out strongly against RFRA, saying in no uncertain terms that this law would be devastating for Indiana.

But he didn’t listen—and now, Indiana has billions of dollars and thousands of jobs on the line because the Governor didn’t stop this dangerous law. Our state cannot continue to suffer at the expense of discrimination.

Now, Governor Pence has a second chance to save our reputation for Hoosier hospitality—by fixing this horrendous law and explicitly protecting LGBT Hoosiers from discrimination.

The fact that Governor Pence is now backtracking on a bill he signed into law just 72 hours ago show that what we’re doing is working.

Let’s keep it up.