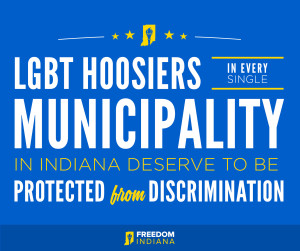 Last night, the Goshen Common Council moved to table a Human Rights Ordinance and another two resolutions aimed at prohibiting discrimination against LGBT residents. The decision to table came as opponents of non-discrimination—largely organized from outside of Goshen—employed harsh scare tactics to drown out local voices in support of the ordinance.

Our spokeswoman Jennifer Wagner released the below statement, cheering on the growing conversation about non-discrimination protections—and committing to making these voices heard in the Statehouse in the upcoming legislative session:

“We are heartened by the outpouring of local support in Goshen to enact protections for LGBT Hoosiers in this community, and we look forward to working with residents and elected officials to make sure their voices are heard at the Statehouse as we continue the fight to update our state civil rights law to prevent discrimination based on sexual orientation and gender identity.

“It’s unfortunate that local voices were drowned out by those who have no interest in a civil conversation about equality. We have seen these scare tactics before, and we will no doubt see them again.

“Freedom Indiana will continue to offer our support to communities across Indiana that want to enact local protections, and we are proud of the support we’ve been able to offer in the months since the Indiana Religious Freedom Restoration Act debacle.

“We know the majority of Hoosiers support protecting LGBT Hoosiers from discrimination in employment, housing and services, and we will stand together in the upcoming session to make sure lawmakers understand how these protections will help our state and our economy.”

Freedom Indiana wants to work with you in your community to advance non-discrimination protections for LGBT Hoosiers! CLICK HERE to let us know you’re ready to get  to work.