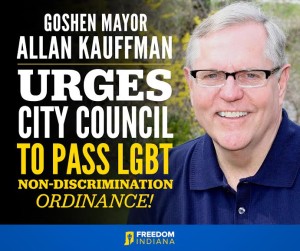 Next Tuesday, July 7, the Goshen City Council will consider updating the city’s civil rights law to include sexual orientation and gender identity.

The push comes after a failed attempt in 2009. But following the aftermath of the Indiana legislature passing the so-called Religious Freedom Restoration Act, Goshen Mayor Allen Kauffman proposed revisiting the issue to ensure that the state’s RFRA law cannot be used as a license to discriminate against LGBT Hoosiers.

In addition to gender identity and sexual orientation, the bill would also add veterans to the city’s civil rights law.