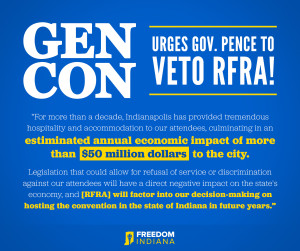 The consequences of the so-called Religious Freedom Restoration Act (RFRA) are real—and just one day after the Indiana House passed SB101, they’re already coming to fruition.

Gen-Con—a convention that draws 56,000+ people to Indianapolis each year—issued a letter today to Governor Mike Pence threatening to relocate should he sign RFRA into law. The convention touts an annual economic impact of more than $50 million for Indianapolis, but says that legislation allowing individuals and businesses a “license to discriminate” under the guise of religious beliefs may cause them to reconsider Indianapolis:

“Legislation that could allow for refusal of service or discrimination against our attendees will have a direct negative impact on the state’s economy, and will factor into our decision-making on hosting the convention in the state of Indiana in future years.”

Though it’s disappointing, this announcement is certainly not surprising. That’s why for months, organizations like Visit Indy have spoken out forcefully against RFRA—arguing that this discriminatory law would damage Indiana’s brand and deter companies from doing business in our state.

And this is only the beginning. If RFRA is signed into law, it would send a clear signal—across the globe—that Indiana is only open for business to some. If the economic impact can already be felt 24 hours after this misguided bill passed in the House, there’s no telling the toll it will take on our state in the coming weeks and months.

Already, tens of thousands of Hoosiers have called on Governor Pence to veto SB101. Click here to add your voice now before it’s too late.