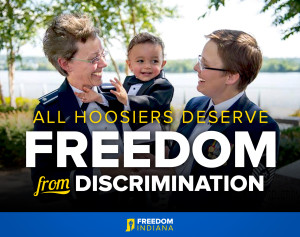 We’re back in action.

That’s right. Starting right now, the historic movement you helped build to defeat HJR-3 last year is returning—and this time we’re up against an even bigger challenge.

Many of the same legislators who pushed the anti-freedom marriage amendment in 2014 are at it again. Now, they’re strong arming legislation that would give individuals and businesses a license to discriminate against LGBT Hoosiers.

The Religious Freedom Restoration Act would bring potentially harmful and unintended consequences to those who call our state home, and we must not pass laws that would disrupt our economic growth, invite costly legal challenges and make our state unwelcoming.

Simply put: this bill is REALLY dangerous—and we don’t have time to waste. Click here to let your lawmakers know that Freedom Indiana is back, and that Hoosiers overwhelmingly oppose this discriminatory legislation.

It sounds familiar, right? A group of extreme legislators, advancing harmful, anti-freedom legislation opposed by a majority of Hoosiers—hoping that the people of Indiana just won’t notice.

This bill would allow businesses to refuse service to same-sex couples. It would allow a school counselor to refuse services to a gay teenager. It could be used by any employee to avoid following rules at work as basic as wearing a hard hat or reporting their Social Security number.

We can’t let this attack on freedom stand. If this bill is passed, it will affect everyone.

That’s why we need your help to send a clear message to lawmakers that Hoosiers won’t stand by as they advance harmful, anti-freedom legislation. Faith organizations and the Indiana corporate community already have stood up against RFRA, but we need you to join the effort because your voice is so important!

Click here to urge your legislators to oppose this license to discriminate.

Last year, we defeated the anti-freedom marriage amendment when no one said it could be done. Now let’s get to work and stop RFRA before it harms our friends and neighbors.