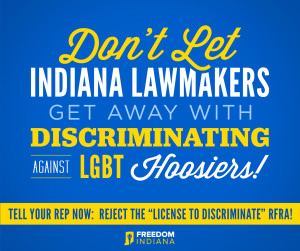 Extreme members of the Indiana House are strong arming the “license to discriminate” RFRA bill—and frankly, they’re doing everything they can to ignore what you have to say.

Tens of thousands of Hoosiers have spoken out against this misguided bill. We’ve told lawmakers that if RFRA passes, it could allow abusers to ignore domestic violence laws. It could put children at risk. It would subject LGBT Hoosiers to discrimination.

Proponents of this shameful bill don’t seem to care that a majority of people in Indiana believe this bill is wrong for our state. So, we have to make them care.

Send a letter right now urging members of the Indiana House to reject RFRA. We’ll hand-deliver your message to the Statehouse before Monday’s final vote on the House floor to make sure the voices of fair-minded Hoosiers are heard loud and clear.

For months, RFRA’s supporters have said this bill has no intentions of allowing for discrimination against Hoosiers. We’ve always known they were lying. But yesterday on the House floor, they finally admitted it.

In rejecting amendments proposed yesterday, RFRA supporters said it’s okay for ANY person or ANY business to ignore local civil rights protections. They even went as far to say that protecting the welfare of Indiana’s children in daycares simply isn’t something we should concern ourselves with.

These fringe lawmakers are ready to uproot the rule of law in order to further their harmful agenda, and in the process, they’ll completely disregard the people they were elected to represent—and not to mention permanently damage our state’s economy.

Elected leaders are put into office to fight on behalf of their constituents—not to ignore the will of the people in order to advance a cruel, dangerous agenda.

We have to fight back. Click here to send a letter urging the Indiana House to reject RFRA—and we’ll take your message to the Statehouse on Monday.

You and I know we’re on the right side of history. Now, let’s make sure our lawmakers hear that too.