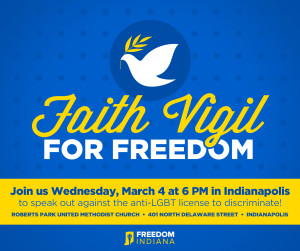 We REALLY need you there:

Next Wednesday, Hoosiers of all faiths will join together in Indianapolis at 6pm to take a firm stance against the so-called Religious Freedom Restoration Act—legislation that would allow a “license to discriminate” against LGBT people in our state.

With only a matter of weeks—even days—before the House considers this legislation, we can’t stand by as out of touch lawmakers do everything they can to allow religion to be used as a weapon against real Hoosier families.

So can we count on you to be there? Click here to say you’ll join us at our Faith Vigil for Freedom next Wednesday (March 4th) at 6pm in Indianapolis.

The freedom of religion is one of our most fundamental rights—as Hoosiers and Americans. It’s enshrined in our constitution and is a core part of who we are as a state.

But this bill isn’t about protecting religious freedom. It’s about discrimination, plain and simple. It’s about allowing anyone—or any business—to use their religious beliefs to ignore any law meant to protect all of us from harm.

If RFRA passes, it would put tens of thousands of people in Indiana in danger. That’s why next week, Hoosiers of all faiths and backgrounds are joining together to stand up for freedom and show our lawmakers that we overwhelmingly oppose this misnamed, mean-spirited bill.

Take a stand against the “license to discriminate” RFRA bill at our Faith Vigil for Freedom next Wednesday (March 4th) in Indianapolis. Click here to RSVP.

It’s been quite the week. Thanks for everything you’re doing to stop this misguided bill in its tracks.

See you next week!